The Zach Murray secret is well and truly out now.

Earlier today Zach won the Australian Master of the Amateurs (AMOTA) Championship held on the West Course of Royal Melbourne GC.  Rounds of 69-69-67-71 were good enough for a 276 total and a record breaking 12-under par total.  Equally impressive is the fact he became the youngest winner in the event’s 18-year history; he is currently 17, turning 18 in March. 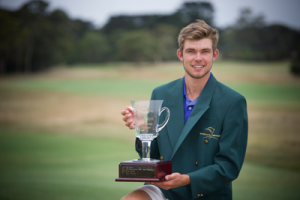 The AMOTA is the highest ranking Amateur competition played in Australia and the field was first class.  It was therefore not a surprise to see Zach jump from 275 to 96* in the Scratch Players World Amateur Rankings (SPWAR) released this afternoon. [* accurate as at 9th January 2015]

Zach comes from Wodonga in Victoria which is about 200 miles north-east of Melbourne.  With the benefit of hindsight he has been a coming man for a while.  I / We just haven’t seen him, perhaps blinded by the lights attaching to his Victorian team mate and younger friend, Ryan Ruffels (17 on 29th April 2015).

With the benefit of hindsight matters are much clearer.  He has been winning events since he was 13 and with the support of his Dad Craig has been travelling in Australia and last year in the UK and USA to hone his game and gain more experience.  The plan seems to be working; his confidence is growing with the knowledge he belongs at the elite level.

In 2013 he won the Aaron Baddeley Junior Aussie Final, the Arron Baddeley International Junior (in China) and finally the Victoria Match Amateur.  2014 saw lots of good results but no victories, most notably his play in the Australian Amateur (QFs), Australian Boys (4th) and the US Junior Amateur (16’s).  He came across to the UK in early August and whilst he reached the semi-finals of the St. Andrews Boys’ Open (losing in the SF’s to eventual winner Cameron Franssen) he missed the cut at the Boys Amateur Championship after two rounds of 79 at Prestwick and Dundonald links.

2014 looks like being a year of consolidation in his progression but with the early season AMOTA win under his belt the world is now his oyster as 2015 unfolds.  A top 100 SPWAR ranking and exemptions to hand for some of the big international amateur events mean that the opportunity is there for him to motor on up into the Top 50 where I am sure he really wants to be.

Zach is clearly an outstanding golfer but what appears to set him apart from many of his peers is his consistency, course management and temperament.  It is certainly good to hear that he plays the game with a smile on his face.

With Year 12 studies at Wodonga Catholic College this year it will be interesting to see what Zach’s 2015 (restricted) playing schedule will be.  All being well his final exams won’t prevent him from coming to Carnoustie and Panmure in June for our Amateur Championship before going on to America for the US Amateur at Olympia Fields CC.

Fort Minor’s song lyric says: “10% Luck, 20% Skill, 15% Concentrated Power of Will, 5% Pleasure, 50% Pain and 100% reason to remember the name”.  I am not sure about the percentages with regard to his golf but I am increasingly confident Zach Murray is a name we are going to remember. Now he’s well and truly on the radar let’s see how much game he really he has got.  Good luck to him in the coming years.