The R&A Selection Committee meets tomorrow to finalise the Great Britain & Ireland (GB&I) team for the 45th Walker Cup match.  The team is scheduled to be announced on Monday 24th August following the conclusion of the U.S. Amateur Championship.

The match will be played at Royal Lytham and St. Annes Golf Club in Lancashire, England on 12th and 13th September 2015.

This is the fifth GB&I Team update I have written and you may wish to read through the others to follow the story so far.  Just click here to do so – Walker Cup Home Page.

Since my fourth update on 12th July the Open Championship, the English, Scottish and Welsh Close Amateurs, the International European Amateur and the Boys and Mens Home Internationals have been played.  This week the U.S. Amateur and Irish Close are being contested.

The Selectors – Captain Nigel Edwards, Andy Ingram (WAL), Garry Hay (SCO) and Michael Burns (IRE) – will also have had the benefit of seeing some of the leading contenders at close quarters at the Squad Session that took place at the host course, Lytham, on 21st and 22nd July.  However, only they and the players invited know what happened there.

So let’s look at some of the objective evidence that the Selectors will no doubt have in front of them.  First and foremost that means the two Amateur World Rankings which should clearly show us who has been playing well in recent times.

The R&A and USGA oversee the World Amateur Golf Rankings (WAGR) and update them weekly on a Wednesday.  So let’s start with the WAGR rankings released yesterday covering the 12 month period to 16th August 2015.  I am going to focus on the Top 25 as it is hard to see the Selectors wanting to dip lower than this. 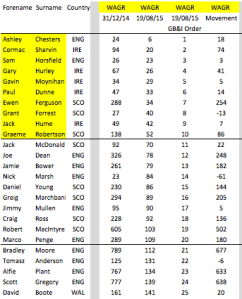 If the WAGR was used in isolation then based on the current rankings the players highlighted above in yellow would be selected.  The above table also shows each player’s WAGR moves since the start of the year.

Let’s now have a look at the Scratch Players World Amateur Rankings (SPWAR), generally accepted as being the most thorough and accurate of the two amateur listings.  This ranking covers a 24 month period and includes many more events.

I have maintained the yellow highlighting from the WAGR list above but highlighted in green the new players that make the SPWAR GB&I Top 10, namely Jack McDonald and Ben Taylor.  Again the above table also shows each player’s SPWAR moves since the start of the year.

As has been the case for some time Ben Taylor (WAGR 181 / SPWAR 52) and Graeme Robertson (WAGR 52 / SPWAR 144) are outliers in the GB&I ranking analysis when you consider both lists.  The WAGR doesn’t like Ben and likewise the SPWAR doesn’t rate Graeme.

Finally let’s have a look at the GolfBible Combined Ranking (GBCR) which brings together both rankings by simply averaging out the WAGR and SPWAR results.

The Top 10 GB&I players in my combined ranking are clearly shown above as are their 2015 movements on this list.

I also think the Selectors should consider course form.  We have the benefit of being able to review the scoring and results from The Lytham Trophy in 2014 and 2015.  Whilst not comprehensive, as this early season event is not available to our US College based players, it is still a useful reference point.  The Lytham is one of the world’s most prestigious events and this year it had the 14th strongest field in amateur golf. 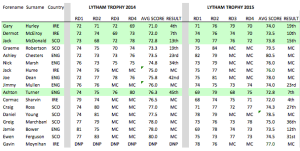 The above table shows how the leading players who competed at Lytham got on.  Just four players made the cut in both years and it shows very clearly that Gary Hurley, Dermot McElroy and Jack McDonald have performed very well here over the last two years.  As we all know different courses suit different players and turning up positively is half the battle in golf.

So without further a do here are the ten players plus two reserves that I believe should be selected for the 2015 GB&I Walker Cup Team (in the order in which I would select them): –

1. Paul Dunne (IRE) 22 – SPWAR 9  / WAGR 33 (WC SQUAD)
A superb Open Championship performance followed by a T11 at the International European Amateur in Slovakia and qualification for the US Amateur Match Play stage this week.  Paul has played consistently well this year with the above results backing up his 5th place finish at the NCAA Division 1 National Championship, a Brabazon T9 and a European Team Stroke Play (SP) Qualifier T8.

2. Ashley Chesters (ENG) 26 – SPWAR 8 / WAGR 6 (WC SQUAD)
A T12 finish at The Open, which could have been even better save for a poor finish to his Rd. 1, must be the highlight of Ashley’s season.  He has also enjoyed good results at the Welsh Amateur (T2), The Amateur (last 16) and the Brabazon Trophy (T7).  Importantly he has also demonstrated good match play form contributing well at the European Amateur Teams (W5/H0/L1), for England against Spain (4/0/0) and at last week’s Home Internationals (3/1/2).

3. Grant Forrest (SCO) 22 – SPWAR 25 / WAGR 40 (WC SQUAD)
Back from San Diego, where he ranked 84th in the Golfstat US college player rankings (2nd only to Paul Dunne in GB&I terms) for the 2014/15 season Grant delivered a superb Amateur Championship performance, finishing runner up to Romain Langasque.  Whilst he would have liked to go further in the recent Scottish Close Amateur (a match play event) and at this week’s US Amateur there can be no questioning his contribution to Scotland’s 2015 European Amateur Team Championship victory (5 points out of a possible 6).

4. Gavin Moynihan (IRE) 20 – SPWAR 22 / WAGR 29 (WC SQUAD)
Gavin, a member of the 2013 Team, has found a little more consistency since winning the Irish Amateur.  He made the Last 32 at The Amateur, finished 2nd at the Brabazon and recently came 3rd at the European Amateur.  Now fully deserving of his second Walker Cup selection.

5. Gary Hurley (IRE) 22 – SPWAR 21 / WAGR 26 (WC SQUAD)
Whilst I picked Gary in July I expressed some concerns about his recent form and scheduling – where in particular he chose to miss The Amateur and Brabazon.  He had a strong winter overseas (South African Amateur T5, Spanish International Amateur 2nd, Argentina Stroke Play T8 and Southern Cross Invitational 3rd) and followed it up back home in the early summer  (Lytham Trophy T19 and Irish Amateur T25).  However, I felt he needed one more result – therefore it was great to see him finish 2nd at the European Amateur to cement his spot.  He has a proven Foursomes partnership with Paul Dunne and will be confident at Lytham having finished 4th and 19th at the 2014 and 2015 Lytham Trophy events.

7. Jack McDonald (SCO) 21 – SPWAR 42 / WAGR 70 (WC SQUAD)
Jack reached the semi-finals of The Amateur losing on the 19th hole to the eventual champion Romain Langasque.  He missed the Brabazon but made the cut at the conflicting Challenge Tour event in Scotland. He was the highest GB&I finisher in the European Amateur Team Championship SP Qualifier (T4) and alongside Forrest largely delivered the Championship to Scotland (also delivering 5 out of 6 possible points).  Whilst not at this best at last week’s Home Internationals (2/1/3) he does have good Lytham form to fall back on – finishing 13th and 15th at the Lytham Trophy in 2014 and 2015 respectively.

8. Sam Horsfield (ENG) 18 – SPWAR 45 / WAGR 23 (WC SQUAD)
How can you select someone for Lytham who has never played on a links course and hardly knows any of his team mates ?  Not easily but Sam hasn’t really given the selectors any choice.  His rankings are high across the board and he is competing week in week out against the best fields in amateur golf.  My only question mark would be his match play experience and record.  I said last time that for me he needed to do well in both the Western Amateur and US Amateur to force his way in.  He has done.  He made the 16-man Match Play Stage of the Western losing in the Quarter Finals to Aaron Wise and this week has done the same at the US Amateur and at the time of writing is comfortably through to Rd. 2.

9. Jack Hume (IRE) 21 – SPWAR 34 / WAGR 42 (WC SQUAD)
Jack has done well in recent weeks.  He finished T19 on -13 at the European Amateur (which could have been better after a -12 first 36 holes) and contributed well to Ireland’s Home Internationals victory last week (3/1/2).  Additionally at Royal Portrush Jack was unbeaten in Singles playing at No. 1 (2/1/0) but his foursomes partnership with Gavin Moynihan failed to spark (1/0/2), which is a slight concern.  Earlier this season Hume finished T6 at the St. Andrews Links Trophy and followed it up with a T3 at The Brabazon Trophy.

10. Ewen Ferguson (SCO) 19 – SPWAR 55 / WAGR 34
Ewen has played very well this year, winning twice in Scotland and following it up with good results at the Irish Open Amateur (T3), Scottish Open Amateur (T4), Amateur Championship (T7 / 64s) and Brabazon (T11).  He was invited to the Walker Cup squad session in July on the back of this.  A strong match play track record both in the Boys’ Amateur, which he won in 2013, and for Scotland, where he has played foursomes with Forrest, means he must be there or thereabouts.  A surprise Rd. 3 loss at the Scottish Close Amateur had perhaps left him needing something in the final weeks.  However, he chose to skip the European Amateur and Home Internationals and therefore had a lot riding on the US Amateur which clearly didn’t work out.  Let’s hope he doesn’t regret these scheduling decisions on Monday morning as he is now right on the cusp for me.

11. Dermot McElroy (IRE) 22 – SPWAR 84 / WAGR 165
‘Horses for courses’ – anyone who has followed my postings know how highly I rate Dermot’s T7 and T10 finishes at the 2014 and 2015 Lytham Trophy events in the context of this team selection.  He has also played consistently well since Lytham – Irish Amateur (5th), Brabazon Trophy (11th) and European Team (SP T8 / 2 out of 3 points in the MP). His 2015 Home Internationals record (3/0/3) was a bit mixed where it really needed to be perfect.  Of course he also won the West of Ireland earlier in the year.  He has just fallen short for me and his non-invitation to the recent Squad Session suggested the Selectors hadn’t been persuaded either.  His case obviously hasn’t been helped by the fact there are already potentially five other Irish players (above him) in the Team.  His knowledge of the course and many of the team make him an ideal reserve though.

12. Jimmy Mullen (ENG) 21 – SPWAR 123 / WAGR 90 (WC SQUAD)
Not quite the Home internationals I had hoped for for the normally strong Mullen / Chesters partnership (0/1/2) which is not really what Jimmy needed. Having said that the partnership is nearly as well established as the Dunne / Hurley one and Mullen was unbeaten in Singles (1/2/0).  He just hasn’t done enough to make the Team for me.  Having said that I wouldn’t be surprised to see him in it and, if not, he would certainly make a very sound Reserve.

Finally, I could also make a case, in alphabetic order, for David Boote (WAL), Bradley Moore (ENG), Marco Penge (ENG), Alfie Plant (ENG), Graeme Robertson (SCO) or Ben Taylor (ENG) making up the Reserve positions.  However, I would be surprised if any of these were to make the actual Team after following their performances this year and based on their current rankings.

I particularly like the idea of Moore and Penge being invited to attend – possibly as the reserves – as the Walker Cup dates don’t fall kindly for these two outstanding young players.  2015 has probably come too soon and 2017 may come too late for both of them.  With neither planning to go to a US College they may need some persuading to hang around for the next Walker Cup match – what better way than seeing the event at close quarters this year.