Claire Dowling (née Hourihane) was born on 18th February 1958 near Dublin in Ireland. She shares her birthday with another Irish amateur great, Joe Carr, who was born in 1922.

Her father, Bill, was a keen golfer and member of Woodbrook GC in Bray, County Wexford, on the coast just south of Dublin. Claire joined Woodbrook and represented the Club throughout her career.

By no means long she developed a game based on a rhythmical swing that consistently delivered sound ball striking and accuracy. “When I was playing reasonably well, I would regularly hit 16 or 17 greens in regulation. And I really loved my 4-wood. I had great confidence in hitting it 170-175 yards off the fairway.” she recently told Irish golf writer, Dermot Gilleece.  In her book ‘The Women Golfer’ Belle Robertson described Claire as ‘a wonderfully tidy little golfer who should never be underestimated’.

She twice lost in the semi-finals of the British Ladies’ Open Amateur Championships.

She was only the second Irish golfer to win in the USA, following Christy O’Connor Snr at the 1977 World Seniors, when she won the 1983 Women’s South Atlantic Amateur tournament (‘The Sally’).

In terms of the other leading English Women’s amateur events Claire also won the Hampshire Rose (1986), the Critchley Salver (1990) and the Bridget Jackson Bowl (1998).

Unsurprisingly she earned a great deal of international recognition: –

The 1986 victory was particularly memorable because it represented the first time a British or European golf team, male or female, had won in the United States. 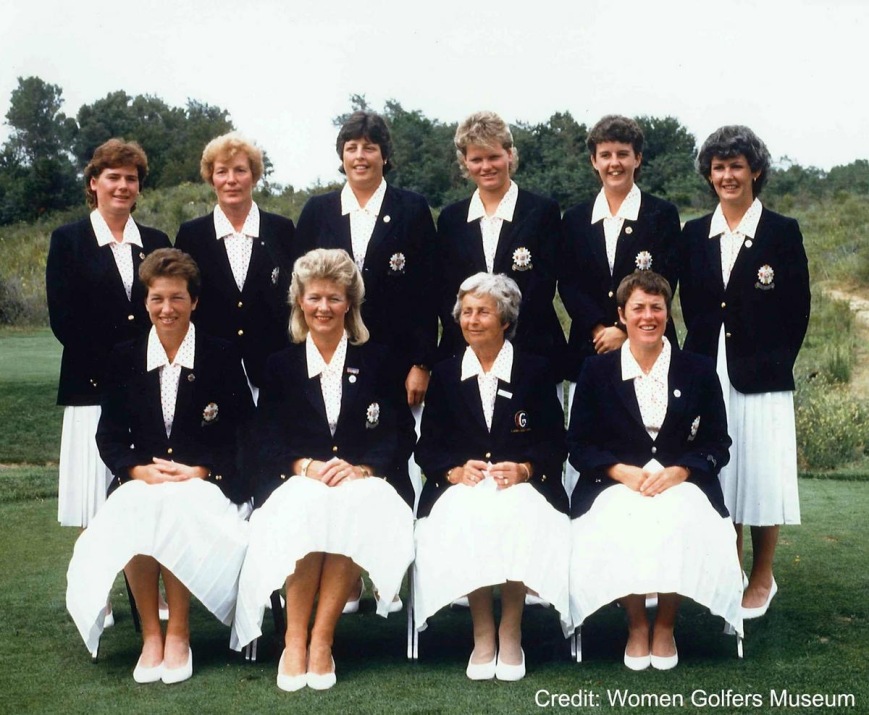 Disappointingly Claire was omitted from all four series of games by Captain Diane Bailey in 1988.

Claire captained Ireland in the Women’s European Team Championships in Finland in 1997 and at the Women’s Home International Matches in 1996 and 1997.

She was due to captain the GB&I team at the World Amateur Golf Team Championship in Chile in November 1998. However, the Ladies Golf Union withdrew the travelling party due to safety concerns following the arrest in London a few weeks earlier of the former Chilean dictator General Augusto Pinochet. The Eisenhower Trophy event was played the following week in Chile with the Men’s GB&I team travelling and ultimately winning the competition.

Last but far from least Claire was non-playing captain of the 2000 Curtis Cup team. GB&I lost the match at Ganton GC 10 – 8.

In June 2006 Claire retired from competitive golf – which at the time was County Golf with Warwickshire.

However, she was persuaded to come out of retirement by her friend Tracy Atkin in 2012 to play in the Brenda King Foursomes, an England Golf run national competition for senior ladies.  Tracy and Claire won the competition (Frilford Heath) and successfully defended it in both 2013 (Gog Magog) and 2014 (Minchinhampton). They decided to go out at the top and didn’t defend at Coxmoor in 2015.

Claire moved to England in the late 1980s obtaining an administrative job at the famous Wentworth Club in Surrey. While there she met and married her husband Peter. They subsequently moved to Solihull in the West Midlands in 1996 and Claire joined Copt Heath. Interestingly her appointment as 2000 Curtis Cup captain coincided with Peter McEvoy’s captaincy of the Walker Cup Team in 1999 and 2001, thus making Copt Heath, probably the first and last club to provide the GB&I captain to both female and male amateur teams simultaneously. Claire was afforded Honorary Membership of Copt Heath in 2014.

Following Peter’s retirement the couple moved to Budleigh Salterton in 2014 and Claire now plays at the local club, East Devon.  In one of her first competitions at her new club she won the Ladies’ Club Championship by 8-shots.  She still plays off a low single figure handicap.

In 2012 Claire was appointed Chair of the Handicap and Course Rating Committee for England Golf. She also sat on England Golf’s Club Services Committee.  The former role means she also sat on the The Council of National Golf Unions (CONGU) Board and Technical Committee up until 2016, with representatives from The R&A and the other Home Unions.

In February 2015 Claire became one of the first women members of The Royal & Ancient Golf Club of St. Andrews (The R&A). Within this first wave of 14 ladies there were just five women from Great Britain and Ireland (GB&I). These were HRH The Princess Royal, Dame Laura Davies, Lady Angela Bonallack, Belle Robertson MBE and Claire Dowling. For more information on the R&A’s Women Members click here: Women Members – The R&A and Augusta National GC.

This was not her first involvement with the R&A though. As a representative of the Ladies Golf Union she became the first women to sit on the R&A’s Amateur Status Committee between 1997-2001.

Claire qualified as a Level 3 Tournament Referee in 2011 and in September 2015 was invited to join the R&A’s Rules of Golf Committee. In September 2017 she was made Deputy Chair(wo)man of this Committee, also becoming a member of the Joint Rules Committee (with the USGA). As a result she played an important role in developing the new January 2019 rules.

On 21st January 2016 she received the ‘Distinguished Services To Golf’ Award from the Irish Golf Writers’ Association (IGWA).  Claire had previously been awarded the IWGA’s ‘Women’s Amateur Player Of The Year’ award in 1981, 1983, 1984, 1986 and 1987.  Brian Keogh of Irish Golf Desk recorded the event at Castleknock Golf Club – click here to download and listen to Claire’s acceptance speech.

On 28th January 2017 Claire was elected an Honorary Life Member of the Irish Ladies’ Golf Union Limited at their Annual General Meeting.

In September 2019 Claire was invited to join the General Committee of The R&A.