Joyce Wethered (who following her marriage became Lady Heathcoat-Amory) was unquestionably one of the most successful woman golfers of her day and is still widely considered one of the best the world has ever seen.  On the anniversary of her birth, 114 years ago today, I thought I would take a look at her story.

Wethered, whose father was a good player with a handicap of six and whose mother also played, took up the game as youngster during family holidays at Bude, Cornwall and in Dornoch, Scotland, where the family had a house overlooking the course.  She simply drifted into the game because that’s what her family did.

She started to take a real interest in golf aged 9 and shot an 89 when aged 10.  She never went to school so perhaps her home tutoring afforded her some practice flexibility.  She joined her local club, West Surrey, which had only opened in 1910, when she turned 12.  She made good progress and was 17 when she was first selected for the Surrey Ladies team, by this time playing at Worplesdon with a handicap of 5.

Despite only having one formal lesson she developed her game and competitive instinct by copying and playing with her older brother, the 1923 British Amateur Champion and Walker Cup player Roger Wethered, and observing Fred Robson, West Surrey’s Pro. At 5ft 10” she had a graceful, well balanced powerful swing and often hit the ball well over 200 yards, out-driving many of the leading male players of the time. Wethered also had a great mental strength, which she described as a “cocoon of concentration”.

The greatest players of her era certainly admired her play and respected her abilities. Bobby Jones said: “I have not played golf with anyone, man or woman, amateur or professional, who made me feel so utterly outclassed. It was not so much the score she made as the way she made it. It was impossible to expect that Miss Wethered would ever miss a shot-and she never did.” Walter Hagen said: “As I watched her I thought there wasn’t a male golfing star in the world who wouldn’t envy the strong, firm strokes she played. She hit her shots crisply, like a man expert.” Henry Cotton said: “In my time, no golfer has stood out so far ahead of his or her contemporaries as Lady Heathcoat-Amory. I do not think a golf ball has ever been hit, except perhaps by Harry Vardon, with such a straight flight by any other person.”

She won the English Women’s Championship on the five occasions she entered it, 1920, ’21, ’22, ’23 and ’24, a run of 33 straight wins in the competition. At the 1920 Championship at Sheringham, in Norfolk, she primarily went to accompany her friend Molly Griffiths. Aged 18 she ended up beating the favourite and holder Cecil Leitch in the Final; it was Leitch’s first loss in a non-handicap match in seven years. Despite at one point being 6-down she finally won on the 17th. As she holed the winning 9 foot putt a train sped past the green. When asked about this later she famously replied: “What train?”.

At the time ladies golf was largely social and elite competitions were strictly amateur and few and far between.  Joyce only really played in the Surrey Ladies’ Championship beyond the two Majors noted above.  She won the inaugural Surrey event in 1921 and went onto win it a further four times, in 1922, ’24, ’29 and ’32.  A rare trip to France in 1921 saw her lose the final of their Ladies’ Open Championship 6 & 5 to Cecil Leitch.

As noted above after winning the 1925 British Amateur she had retired aged 23. Faced with dismay from her growing army of supporters she said at the time: ”I have simply exercised a woman’s prerogative of doing something without the slightest regard for what anybody thinks and because I want to please myself.”

Wethered was persuaded to be playing captain of the Great British Curtis Cup team in the inaugural 1932 match against United States at Wentworth. The US Team were much better prepared, with the GB Team only arriving in Surrey the evening before the match, and won the contest easily 5.5-3.5. For the third and final time Wethered was again paired against Glenna Collett in the singles. Wethered maintained her 100% record winning 6&4 in their 18 hole match.

Joyce Wethered is always linked to the Worplesdon Mixed Foursomes competition, played annually since 1921 at the club that she and her brother were attached to for most of their lives. She won the competition eight times in all with seven different male partners.  Her successful partners included Bernard Darwin, Cyril Tolley (2) and her brother, Roger.  After the Second World War she often played with her husband in the competition.

Just a few months after her British Amateur win The Wall Street Crash occurred in late 1929 and her family lost much of their wealth, built up through their ownership of several coal mines. As a result Wethered had little choice but to pitch in.  She ended up forfeiting her amateur status in 1933 by joining the golf department at the London department store, Fortnum and Mason. Later the same year she agreed a contract with Spalding to market a range of steel shafted golf clubs in her name. 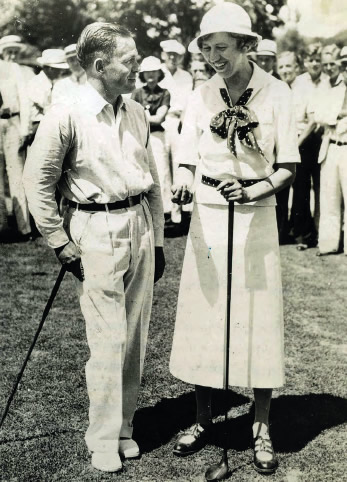 In 1935 she wished to visit friends in America and to help fund the 3 month trip she agreed to play in a number of exhibition matches across North America – these were sponsored by the John Wanamaker Department Store in Philadelphia who also contracted Wethered for marketing purposes. Joyce competed in 52 mixed four ball events with the likes of Bobby Jones, Francis Ouimet, Gene Sarazen, Glenna Collett and Babe Didriksen. Her itinerary included games at Winged Foot, Merion, East Lake, Medinah, Pasatiempo and Pebble Beach. It was reported that she broke 34 women’s course records during these matches. It is also said she cleared $20,000 during the trip, helped in no small part by Fortnum’s agreeing to pay her full salary whilst she was away.

She wrote a number of golfing articles and two famous books, ‘Golf From Two Sides’ (with Roger, 1922) and ‘Golfing Memories and Methods’ (1933).  The latter a mixed instructional and guarded autobiography.

In 1937 she married a baronet, Sir John Heathcoat-Amory and left her parents in Surrey to move to the ancestral home, Knightshayes Court in Tiverton, Devon. They had no children. After World War II she was reinstated as an amateur golfer and continued to play with her husband regularly, often at Tiverton, a club Sir John was instrumental in founding in 1932.  He owned the farm land and agreed to let 120 acres for the formation of a golf club.

Joyce joined Tiverton in 1937 and succeeded Sir John as Club President in 1973, a position she held until her death in 1997. Tom Hanson, the Assistant Pro at Tiverton, has kindly shared some photos of the commemorative items that adorn the clubhouse. 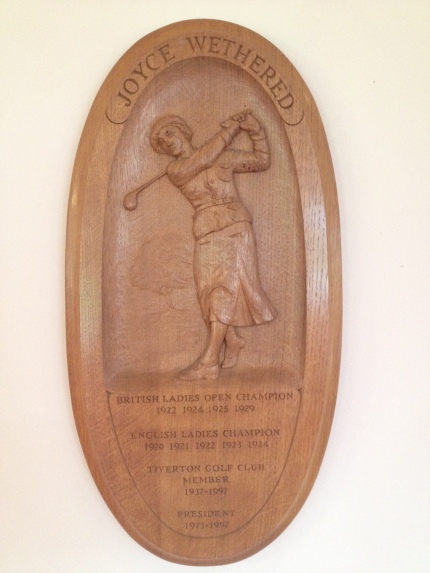 The couple had a shared interest in gardening and took great delight in developing the land around Knightshayes. By way of acknowledgement as to the quality of their work the Royal Horticultural Society awarded the Victoria Medal of Honour to both Sir John and Lady Heathcoat-Amory. When Sir John died in 1972 Knightshayes was handed over to the National Trust. Joyce made numerous donations to the National Trust to support the renovation of the property in the 1970s.

There remains a small museum, ‘The Golf Room’, at Knightshayes remembering the famous Lady of the house. The displays contain some superb golfing memorabilia and medals from her career. Sadly there is no putting green or pitch ‘n’ putt in the extensive grounds !

In The Associated Press’s 50-year poll in 1950, Wethered ranked seventh among all golfers and first among female golfers. The men ahead of her were Bobby Jones, Ben Hogan, Walter Hagen, Byron Nelson, Sam Snead and Gene Sarazen.  More recently, in 1975, her status in the history of the game was recognised when she was inducted into the World Golf Hall of Fame.

Joyce Wethered enjoyed a long life dying on 18 November 1997, just a day after her 96th birthday.