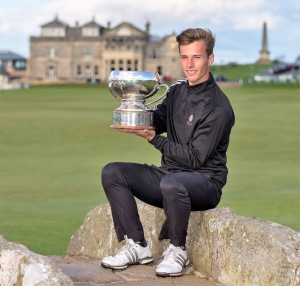 He must now be assured of a place in the 2017 Great Britain & Ireland Walker Cup Team.

Final day rounds of 69 and 70 took Matthew to a finishing total of -11. He bogeyed the last two holes in round 4 as he played in conservatively.

JR GALBRAITH (IRE) retained his 1 shot advantage over the field with a 71 (-1) over the Old Course.

English pair Bradley MOORE (66) and Laird SHEPHERD (67) shot the best two rounds of the day to get their tournaments back on track. They’ll both start the final day on -2.

Unfortunately Connor SYME (SCO) had to withdrawal early in his second round due to a severe migraine.

The Top 40 and Ties cut fell at Even par with a total of 45 players progressing.

With 32 players on -2 or better, i.e. within 5 shots of the lead, an exciting final day’s play appears guaranteed.

Day 1 of the the St. Andrews Links Trophy on the Jubilee Course was dominated by the weather. A rainy and windy morning giving way to improved conditions in the afternoon enabling the later starters to shoot some impressive numbers.

Having started with two bogeys Ireland’s JR GALBRAITH reeled off 8 birdies in his remaining 16 holes to shoot a best of the day 66. His -6 total being good enough for a 1-shot lead over David MICHELUZZI (AUS) and Claudio CONSUL (GER).

144 golfers from 21 different countries will tee off on Friday 9th June in the 29th St. Andrews Links Trophy.

This Championship has quickly established itself as one of the ‘Majors’ in men’s amateur golf.

A list of all the past winners can be found in an Appendix at the end of this article. The most famous is Justin Rose who won the Links Trophy in 1997. 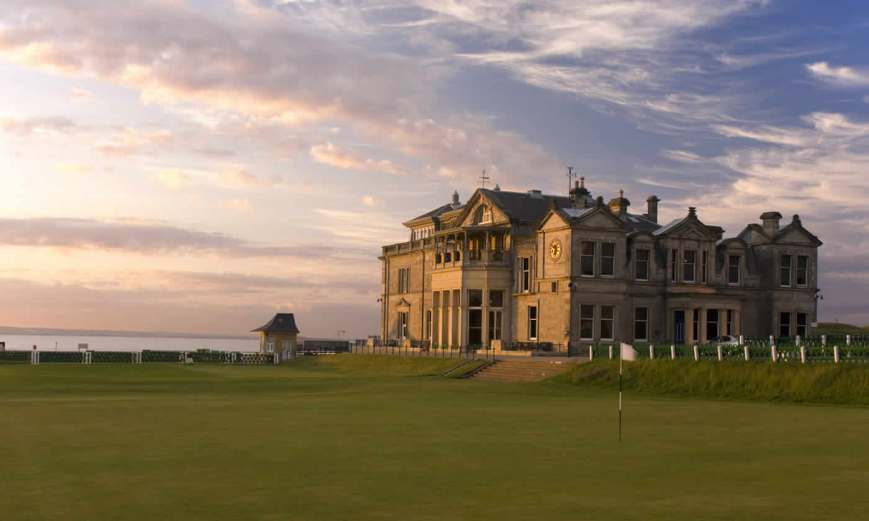 The Links Trophy is a 72 hole scratch stroke play competition normally played over a combination of the Old and New Courses at St. Andrews in early June.

After various National Golf Union nominations the field is determined by World Amateur Golf Ranking (WAGR) rather than handicap as is normally the case.

This year Round 1 will be played on the Jubilee Course and Round 2 on the Old Course.

Following a top 40 and ties cut the leading players will play 36 holes on the Old Course on Sunday. 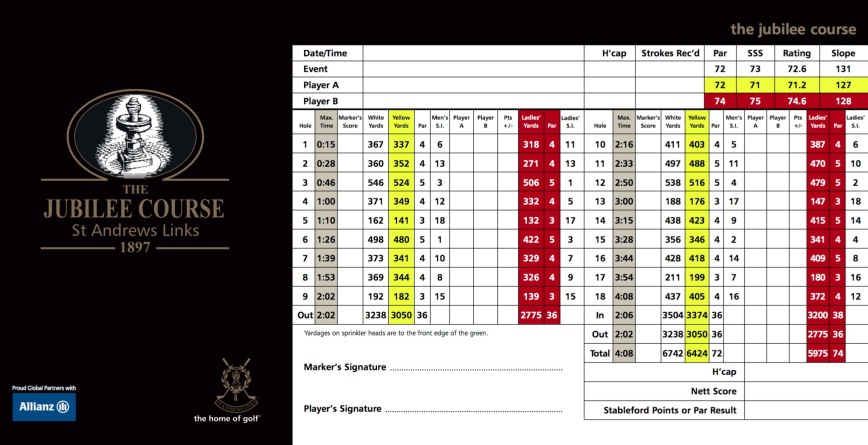 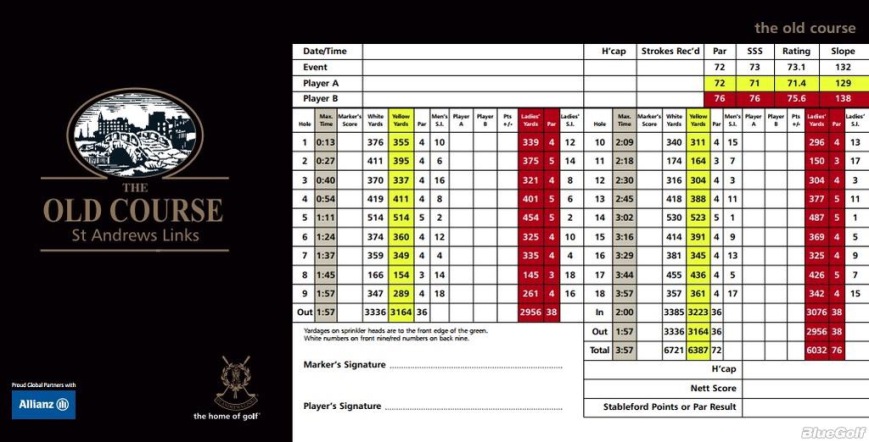 The winner will be the player who returns the lowest 72 hole score. In the event of a tie a sudden death play-off will be held over holes 1 and 18.

Ties for other places are decided by the lowest score for the last 18 holes or the last 9 or 6 or 3 or 2 or 1 hole if necessary.

The Scratch Players World Amateur Ranking (SPWAR) placed the Links Trophy 6th in its 2016 Amateur Tournament Ranking based on the strength of it’s field. The 2017 field is impressive so there is no reason to think it will be any lower in this year’s list.

18 of the 21 members of the GB&I Walker Cup squad are in action this weekend. Many of them drawn together in the opening rounds to help the selectors follow them all closely. David BOOTE (WAL), Jack DAVIDSON (WAL), Craig HOWIE (SCO), Robert MACINTYRE (SCO) and Connor SYME (SCO) will all be looking to continue their good play whilst the others will be hoping to kick start their selection claims.

Of the missing trio Scott GREGORY (ENG) is preparing for the US Open and Stuart GREHAN (IRE) is competing in the Arnold Palmer Cup in Atlanta.

Tee times in Rounds 1 and 2 start at 7.00am and end at 3.10pm so as with any links course the draw could play a big part in the outcome.

The winner receives The St Andrews Links Trophy and a cheque for £500.

Reducing cash prizes are awarded to the top 10 finishers in all.

In addition to the main prizes The Ian Forbes Memorial Cup is awarded for the best aggregate score on the first two days of the event.

In something of a surprise Ireland’s Conor O’Rourke won the 2016 St. Andrews Links Trophy with a magnificent performance that saw him lead from start to finish. 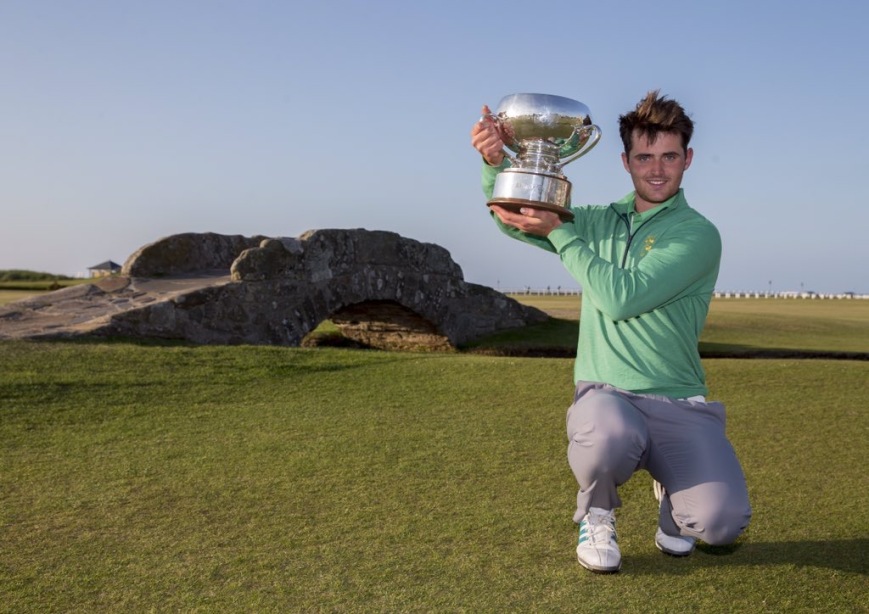 Prior to play commencing O’Rourke was ranked 1,245th in the SPWAR. He was a higher 549th in the World Amateur Golf Ranking (WAGR).

Appendix – Past Winners & Notable Past Performances

As one would expect for a competition held at the home of golf the list of past winner’s is impressive:-

Interestingly given the normally cosmopolitan nature of the fields the Links Trophy has only been won by players from outside GB&I on three occasions – Australia’s Stuart Bovier (1990), Daan Huizing from The Netherlands (2012) and last year Federico Zucchetti from Italy.