History has marked John Graham Jr. down as the ‘Uncrowned King’, the greatest amateur golfer never to win a national Championship. 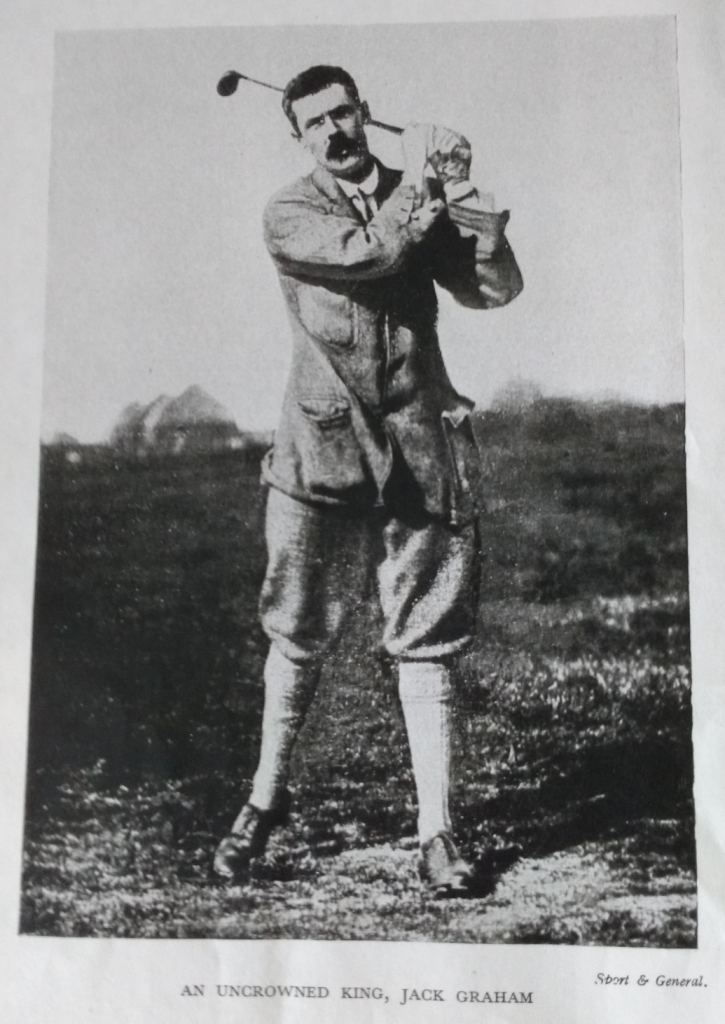 His family were very wealthy. John Snr. was a Director of the Macfie & Sons sugar refinery which previous generations of his family had built up. He moved his family south to work at the new Liverpool branch in 1873. Meanwhile Mary was the grand-daughter of Captain Sandy Allan, whose Allan Shipping Line was one of the biggest shipping companies in the world in the early 19th Century.

The family lived primarily in south Liverpool near Sefton Park but also had a second home ‘The Croft’ on Stanley Road in Hoylake.

Jack took to golf quickly as a young boy learning the game at Royal Liverpool G.C. where his father was a member. John Snr. would become captain of Hoylake in 1886-87.

Jack was educated at Marlborough College, the prestigious public school in Wiltshire, for four years between 1891 and 1894. He was a natural sportsman and captained the College’s cricket and hockey teams as well as playing in their racquets team.

As a teenager he joined the Liverpool Scottish Volunteers and rose to the rank of Captain before stepping down due to the commencement of his business career in the sugar industry and increasing golf commitments.

When he left school he joined his father at Macfie’s as a clerk subsequently rising up the organisation during the rest of his career. He became Secretary of the Liverpool Sugar Refiner’s Association.

On the golfing front he made his debut in the 1896 Amateur Championship at Sandwich losing in the semi-finals to Harold Hilton 4&3. His performances in Kent understandably saw him earmarked as a potential future champion but that elusive major win never came in the years that followed.

It appears he was neither sufficiently consistent or mentally strong enough to ever get the job done. Horace Hutchinson in his Fifty Years Of Golf (1919) wrote it is “his constitutional misfortune that he is not able to last through a long sustained trial” and “Jack has never been able to last, and has been, beaten at that point by men whom he could give three strokes comfortably in ordinary circumstances and in the earlier stages of the tournament. He has been a terrible disappointment to us all, in this way, for a more brilliant amateur golfer never played. It is his health that has knocked him out every time – a lack of robust nerves”.

The Amateur of 1898, played at Hoylake, seems to be indicative of his Championship play. Graham lost in the quarter finals by 1 hole to the eventual winner and his house guest that week Freddie Tait. Graham inexplicably missed two very short putts in the closing holes which would have ensured his passage to a semi-final against John Low. The second one on the 18th hole to take the match back down the 1st was described by the watching Harold Hilton, who Tait had beaten in the previous round, as “about the shortest I have ever seen missed in a Championship”.

Whilst the above analysis of his performances in our two main championships imply that Graham was a serial loser thankfully that was not the case.

In 1902 Royal Liverpool proposed an England v. Scotland International Match prior to their staging of that year’s Amateur Championship. At the behest of his father Jack chose to represent Scotland much to the disappointment of the other English players. Interestingly the Hoylake organising committee stipulated that Graham could not play either Ball or Hilton in this first series due to the local bad feeling it was believed it may cause. The Match became popular and in the ten games Jack played between 1902 and 1911 he won eight times.

He won 26 gold medals and 13 silver medals at Royal Liverpool between 1898 and 1914 most of which were played for during their Spring, Summer and Autumn Meetings. This was no mean achievement given the quality of the club’s membership at the time with the likes of Ball, Hilton, Hutchings, Hutchinson and Laidlay nearly always competing against him.

At the outbreak of World War I Jack, now 37, immediately volunteered to serve in the 10th (Scottish) Battalion, King’s Liverpool Regiment. After fighting on the front line from November 1914, where he rose to Captain again, he was eventually killed on 16th June 1915 during an early morning attack at the Battle of Hooge in Belgium. Jack’s body was never recovered and he is commemorated on the Ypres Menin Gate Memorial near West Flanders in Belgium. 1,000 British soldiers died and 3,000 were injured in the Battle which lasted 12 hours.

In his obituary Bernard Darwin described Graham as “a player of unquestioned genius” who “could not have left a more unforgettable or pleasanter memory”. A view seemingly shared by the membership of Royal Liverpool G.C. who commissioned a posthumous portrait by RE Morrison the costs of which were heavily oversubscribed for. The picture hangs in the famous old clubhouse to this day.

Jack never married and left the modern equivalent of over £2m in his will.

Jack Graham by RE Morrison

Jack Graham appears to have had all of the golfing skills required to be a champion but a combination of family business commitments, bad luck and mental weakness repeatedly deprived him. The fact golfing historians have included him in a ‘Hoylake Triumvirate’, alongside Ball and Hilton, demonstrates that whilst he didn’t collect the trophies he certainly earned the respect of his golfing peers in the early 20th Century.

On all things Hoylake it is perhaps best to leave the final word to Guy Farrer, author of the first Royal Liverpool G.C. history in 1933. He wrote on Graham: “I think he hated Championships; the long drawn-out struggle, the clamour and the shouting, and all the other ordeals that a champion must face were repugnant to his rather shy and reserved nature. Golf, to him, was a game to be played far from the madding crowd, with some congenial friend, where new methods could be tried, with nothing resting on the match except the satisfaction of playing brilliant golf. Those who were privileged to play with him in these private games know what wonders he performed”.

Two of Jack’s siblings, Molly and Allan, were good players too.

Molly won the (British) Ladies’ Championship in 1901 at Aberdovey beating the defending champion Rhona Adair 3&1 in the final.

Allan famously beat Bobby Jones 6&5 in the 1921 Amateur Championship played at Hoylake. He went on to reach the final that year but his father, John Sr, died the night before and he ended up losing 12&11 to William Hunter.