GB&I have now won the St. Andrews Trophy 26 times with Continent of Europe having six outright wins to their name.

I would imagine that both sides are relatively pleased with the outcome. GB&I obviously because they won but Continent of Europe because they were competitive throughout despite fielding by no means their strongest potential team.

Arron EDWARDS-HILL (ENG), Mark POWER (IRL) and Calum SCOTT (SCO) were unbeaten for GB&I whilst Anton ALBERS (GER) was the best performer for the Continent of Europe. 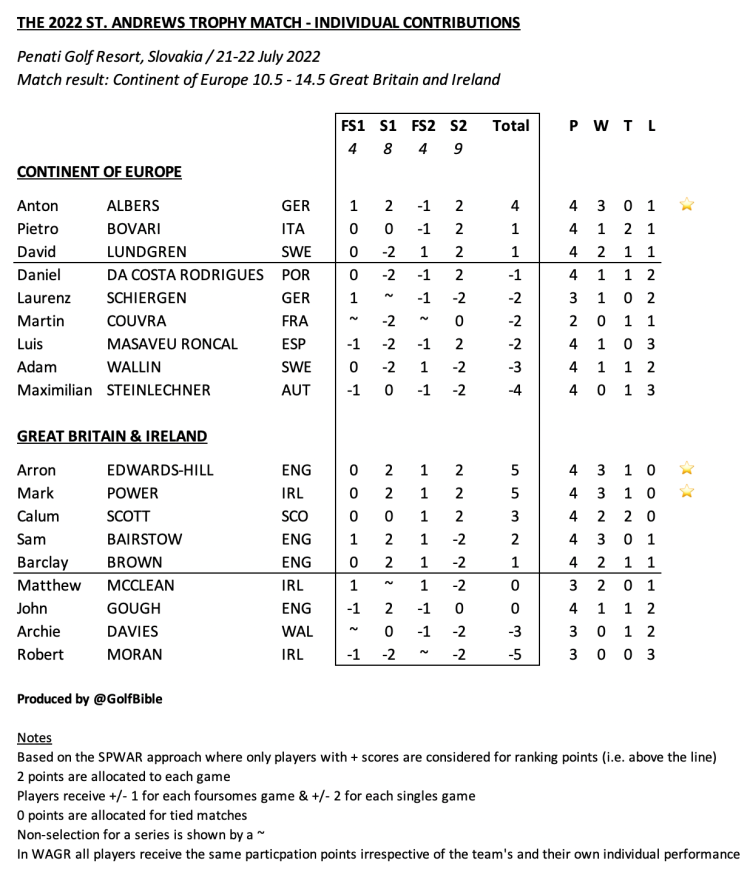 GB&I headed into the final series with an 11-5 advantage and therefore simply needed just two wins from the nine singles to regain the trophy.

Whilst they achieved this modest feat it was Continent of Europe who got the better of the Singles winning it 5.5-3.5.

Only Mark POWER (IRL), Calum SCOTT (SCO) and Arron EDWARDS-HILL (ENG) were able to deliver a full point for the visitors in the afternoon games.

The GB&I team won the Day 2 Foursomes series 3-1 to put themselves firmly in the box seat in the St. Andrews Trophy match.

GB&I’s habit of winning or at least not losing close foursomes games, often on the 18th hole, has been a feature of the match and may ultimately prove to be the difference between the two sides.

GB&I captain Stuart Wilson re-jigged his order and introduced Archie DAVIES (WAL) to his line-up this morning. However, the Davies and John GOUGH (ENG) pairing was not successful with the Swedish pair of Adam WALLIN and David LUNDGREN taking the spoils in the opening game.

The Continent of Europe went with the same players but swapped their first and third pairs from Day 1 around.

GB&I won the other other three games with Sam BAIRSTOW (ENG) and Matthew MCCLEAN (IRL) again winning their foursomes on the 18th green.

Captain Wilson will be pleased to see that the Mark POWER (IRL) & Barclay BROWN (ENG) and Arron EDWARDS-HILL (ENG) & Calum SCOTT (SCO) pairings came through unbeaten for him over the two days. Both tied their games yesterday but won today.

GB&I won the afternoon Singles series 6-2 to take an overnight 8-4 lead over Continent of Europe into the final day.

Archie DAVIES (WAL), who debuted for GB&I this afternoon in place of Matt MCCLEAN (IRL), tied his match as did CALUM SCOTT (SCO), who won the 18th to secure an important half-point for the visitors.

Martin COUVRA (FRA), who lost to John Gough in the opening game, came into the Continent of Europe’s line up with Laurenz SCHIERGEN (GER) stepping down.

GB&I were a little fortunate to come out of the opening foursomes series with a 2-2 scoreline and no doubt will take heart from a good comeback.

The Continent of Europe looked on course for a comfortable overall victory, 3-1 at worse, across the four games for much of the round. GB&I unusually mixed the home nations up with no players from the same country paired together. Only the Bairstow and McClean pairing appeared to gel with the others all struggling for long periods.

However, Europe slipped up down the home stretch and a battling GB&I team were good enough to take advantage in the final three games, halving two and winning the final one.

David LUNDGREN (SWE), who replaced Kiet VAN DER WEELE (NED) on the eve of the match, was brought straight into the Continent of Europe’s starting line up.

Archie DAVIES (WAL) and Martin COUVRA (FRA) were left out of the opening Foursomes by the respective GB&I and Europe captains. 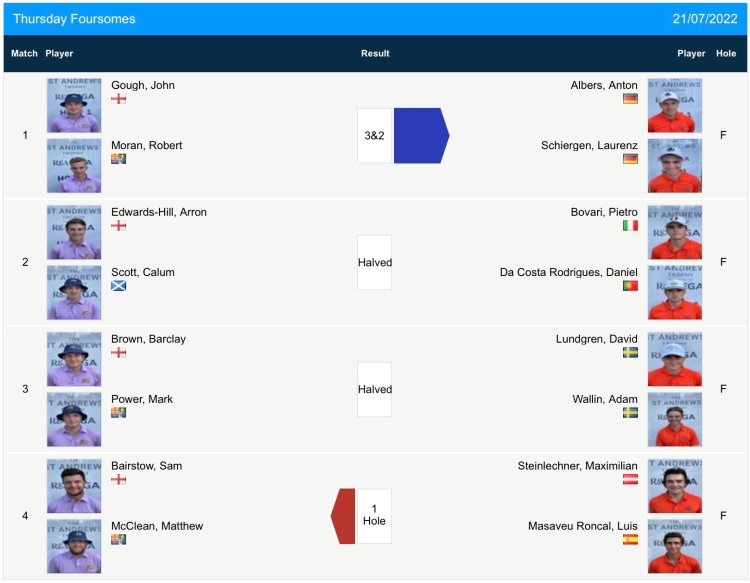 The 33rd St. Andrews Trophy match will be contested on Thursday 21st and Friday 22nd July at Penati Golf Resort in Slovakia. 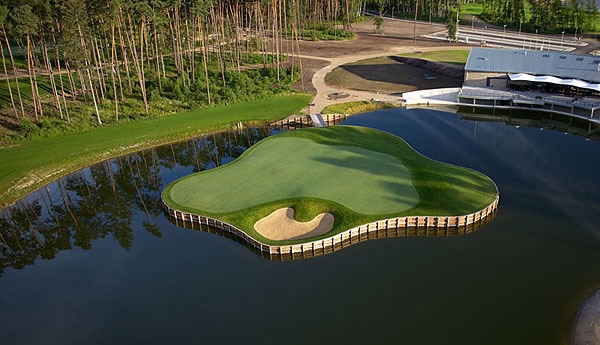 This amateur men’s team match has been played biennially between Great Britain & Ireland (GB&I) and the Continent of Europe since 1956.

It was originally established by The R&A to give more European players the chance to play at the highest level and GB&I players more team match play experience for the Walker Cup which is held in alternate years with this competition.

The St. Andrews Trophy was put forward for the match by the Royal and Ancient G.C. of St. Andrews in 1963.

I will be updating this article with daily reports and results once play commences.

Each team has nine players.

The golfing calendar is extremely busy at this time of year and therefore player availability can be impacted by other opportunities. Recent history shows that this is a particular issue on the Continent of Europe’s side.

Yves HOFSTETTER (Switzerland) will be the Non-Playing Captain of the European team for the second match.

His team was announced by the European Golf Association (EGA) on 13th July and is listed below. Each player’s nationality, their current SPWAR and their regional position is also provided.

It is disappointing that none of the team are in the SPWAR’s Continent of Europe top 10 and surprisingly  just four of the final team are in the current top 30. It is clear that the EGA are increasingly struggling to attract their very best players to the match. 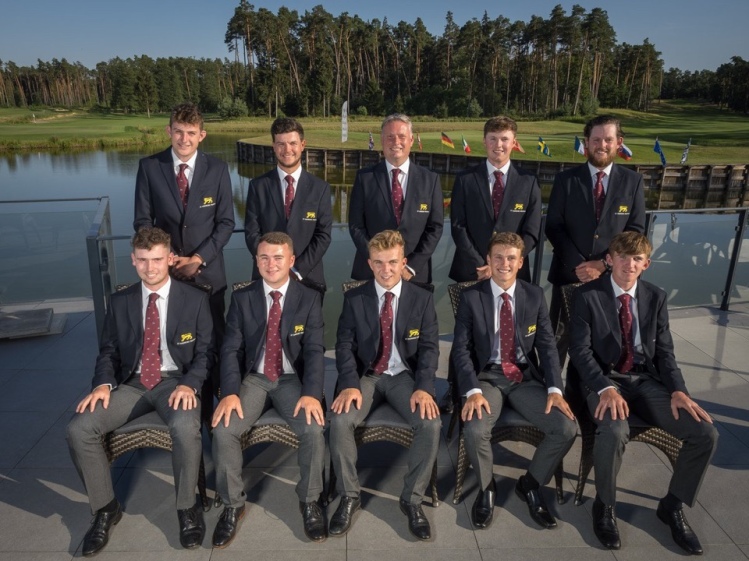 Unlike the European Team above it is hard to argue with The R&A’s GB&I selection. Mark POWER is at face value a current ranking anomaly but he has a lot of goodwill on his side given previous Boys’ and Men’s GB&I team performances.

The St. Andrews Trophy is played over two days and consists of a number of match play foursomes and singles games.

The additional Singles on Day 2 was first played in 2016.

With a maximum total of 25 points available and one point awarded for each match a team will be required to accumulate 13 points to secure an outright victory. As the holders Continent of Europe can retain the Trophy by reaching 12.5 points. 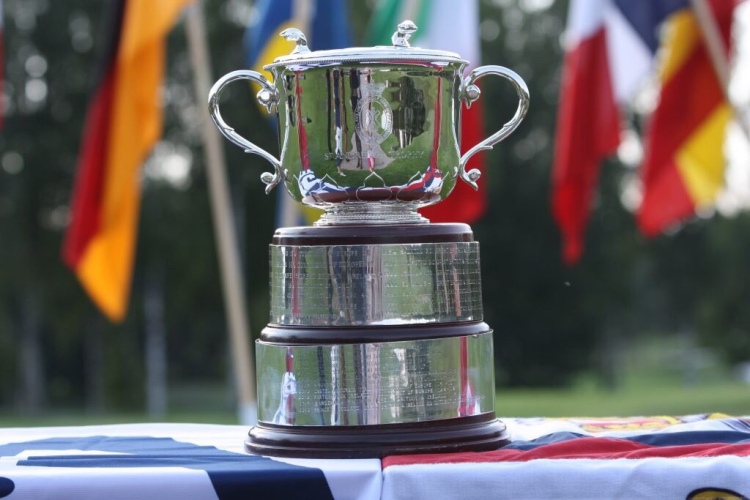 Penati Golf Resort was opened in 2012 near the town of Senica in western Slovakia. It is now a 36-hole golf resort with a Legend Course and Heritage Course.

The Legend Course, designed by Jack Nicklaus and built to USGA specifications, is the one being used this week. It cuts through forests of scots pines and silver birch.

The 15th, a par 6, is noteworthy as it has eleven different tees and can be stretched out to around 780 yards. The par 4 18th, shown above, plays to an island green situated in front of the clubhouse and is the course’s signature hole. 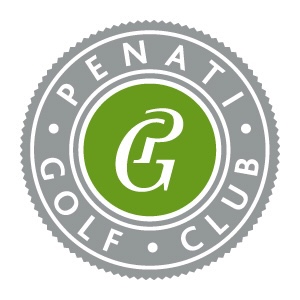 The weather forecast for Slovakia looks very good for both competition days, albeit the afternoon sun may prove problematic: –

The 2020 St. Andrews Trophy match, scheduled to be played at Royal Porthcawl G.C. in South Wales, was postponed due to the COVID-19 pandemic. Porthcawl will now host the next match on 25th and 26th May 2024.

This was just the sixth time Europe had won the match and the 6 point margin represented their biggest ever victory.

Looking at the individual performances Matias HONKALA (FIN) was the star man for Europe winning all four of his matches. Stefano MAZZOLI (ITA) didn’t play in the Day 1 Singles but won all three of the other matches he was selected for.

To date GB&I have won the St. Andrews Trophy 25 times. However, their last outright win came in 2014.

2016 was the first time the match had been halved. This arguably represents another win for GB&I, who were the trophy holders, but I have excluded it from the above numbers.

Europe have won only once on GB&I soil in the history of the match, at Portmarnock GC in 2012.

Click here to view a summary of the – Historic St. Andrews Trophy Results