Ireland won the 2016 Home Internationals after a nail biting 8-7 victory over England on the final day at Nairn Golf Club.

England had led the match 3-2 after the morning Foursomes but Ireland came out fighting in the afternoon Singles. Early on they appeared to be leading virtually all of the matches. England did well to recover a few of the games but at the end of the day the Irish were able to carry their early momentum through to a crucial 6-4 series win.

Man of the moment was Colm Campbell Jr who birdied the last to secure a narrow 1 hole win over Adam Chapman. Playing in the final Singles it proved to be the crucial winning point.

Ireland’s win was their third consecutive one in the Home Internationals and they will no doubt travel to Moortown GC, England full of confidence next year. Next year’s match will be played between 16-18 August 2017.

Here are some additional thoughts on this year’s Home Internationals and the Individual Player performances: –

1) It remains a frustration to me that such an historic and important competition is treated so poorly by the GB&I Unions even after allowance for the crowded amateur golf calendar. The scheduling of the event against next week’s US Amateur Championship left it sadly bereft of 10 of our leading players.

Until this is properly resolved the Home Internationals results will to a degree continue to have something of a hollow ring to them.

2) It was pleasing to see five mid-amateur players amongst the ‘positive’ contributors. Colm Campbell (IRE), Barry Hume (SCO), Matthew Clark (SCO), Lee Jones (WAL) and Graeme Robertson (SCO) all showed they remain competitive at this level. Could we have a mid-amateur in our 2017 Walker Cup team ?

Robin Dawson did very well in the Singles – he beat Thomas Williams (WAL) who was unbeaten in his other two games, George Duncan (SCO), the recently crowned Scottish Amateur champion and Jack Yule (ENG) who had a disappointing week but has been playing well this year.

Ireland failed to win a foursomes series all week. However, the JR Galbraith and Colm Campbell foursomes pairing won all of their matches – pretty comfortably too, 3&2 being their ‘worst’ result – and provided a foundation for their own individual performances and the Irish victory.

The Irish player that continues to impress me more and more though is Stuart Grehan who enjoyed another good week. Fingers crossed he stays amateur for another year.

With Kevin Le Blanc, Marc McKinstry, Thomas Mulligan and Mark Power all coming through the ranks the future continues to look bright for Ireland.

4) England will obviously be disappointed they couldn’t close out yesterday’s winner takes all match against Ireland after winning the Foursomes series.

Ashton Turner played superbly winning all 6 of his matches, pairing up well with James Walker in the foursomes and taking care of Sandy Scott (SCO) 5&3, Evan Griffith (WAL) 3&2 and most impressively Stuart Grehan (IRE) 3&2 in the Singles. Grehan was previously unbeaten in 2016 international Singles games, winning 5 and drawing 1 across the Arnold Palmer Cup, the St. Andrews Trophy and the Home Internationals. Ashton was the only player to achieve the 100% ‘clean sweep’ and was justifiably awarded the Fairstone Player of the Championship award. I wonder if this achievement had anything to do with him not playing in last week’s European Amateur Championship in Estonia, unlike many of the other competitors.

Marco Penge, who has been missing in action in recent months, made a welcome return to form with a strong contribution, notably winning all three of his Singles. Hopefully he is now fully back on track.

Marco’s results were indicative of the England team’s week to some degree – players who you would have expected to be leading the way like experienced campaigners Alfie Plant and Dan Brown and young up and comers Will Enefer and Gian-Marco Petrozzi never really got going. It was therefore left to the likes of James Walker, Adam Chapman, Harry Hall and Josh Hilleard (who was unbeaten in his three games) to pick up the points that nearly took England to the title. 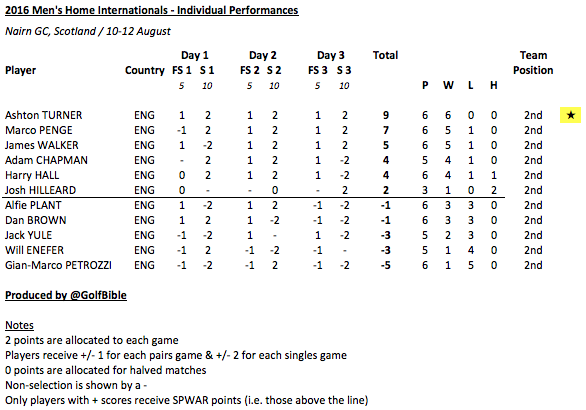 England, with greater strength in depth, suffered less from US Amateur absences than Scotland but I am sure their selectors would still liked to have been able to consider Jamie Bower, Scott Gregory, Bradley Moore and Jack Singh Brar, all of whom were en route to Oakland Hills in Detroit.

5) Scotland, weakened by their inability to select their leading players, put up a valiant fight. All of their matches were tight affairs and their two losses to England and Ireland both came by narrow 8.5-6.5 scorelines.

Liam Johnston and Jamie Savage formed a successful foursomes pairing, winning two and halving one. Johnston also did well in the Singles, preventing James Walker on Day 1 from subsequently going 100% and beating Owen Edwards on the final afternoon.

Sandy Scott and Calum Fyfe won all three of their foursomes games but surprisingly both could only manage one Singles win each.

Foursome partners Craig Howie and Craig Ross will wonder how they didn’t finish higher up the above table. The answer probably lies in generally playing up the order and as a result of some inconsistency. Both seemed to have their moments before then losing a bit of form.

6) Save for the England game where they were thrashed 11.5-3.5 Wales put up a good fight this year. 8-7 losses to both Ireland and Scotland could easily have gone the other way on another day.

Perhaps if David Boote had been available to them these two losses could have been turned around, making them a real factor in this year’s competition.

On a positive note, the Welsh selectors will take heart from the performances of relative newcomers Thomas Williams and Patrick Mullins. 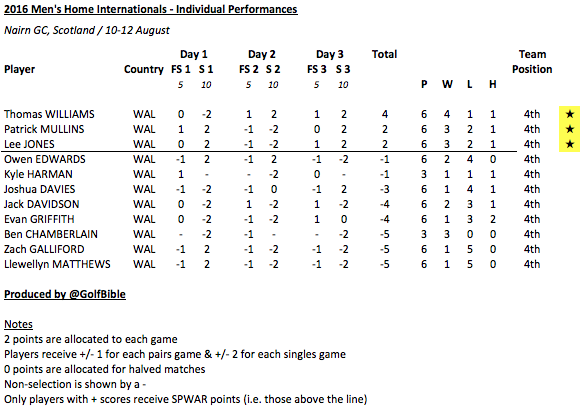 This year’s Home Internationals were clearly a really competitive event. With the exception of one match all the results were very close which has to be a good thing for Great British & Irish golf and player development.

It’s now time to see whether those players that missed the competition in Nairn can make an impact on the biggest stage of all – the US Amateur Championship.

Alfie Plant won the Lytham Trophy today by 7-shots helped in no small part by a superb level par final round of 70. 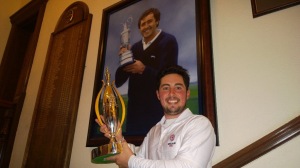 In 2015 the Scratch Players World Amateur Ranking (SPWAR) ranked it the 14th most important amateur competition in the world based on the strength of it’s field. It ranked 3rd in GB&I behind the Amateur Championship and the St. Andrews Links Trophy.

The famous links course certainly presents a stern test. Playing off the blue championship tees competitors have to meet a 7,118 yard par 70 challenge; the front nine being 3,437 yards, a par 34, and the back nine being 3,681 yards, a par 36.

The Lytham Trophy is a 72-hole stroke play event. 18 holes are played on the first two days before a top 40 and ties cut is made. 36-holes are then played on the final day by the leading competitors.

In the event of a tie for the lowest score there is a 3-hole stroke play play-off on holes 1, 2 and 18. If a winner still hasn’t been determined then the play-off moves to sudden death over the same holes. The Winner receives a silver replica of the Lytham Trophy.

This year’s Lytham Trophy will be played between Friday 29th April and Sunday 1st May 2016.

144 scratch golfers from 21 different countries have paid the £90 entry fee and will tee off in what will be the 52nd playing of this prestigious competition. Most of GB&I’s leading amateur golfers will be competing.

Guido Migliozzi (ITA) has withdrawn having been offered an amateur invitation to the Challenge de Madrid event on the European Challenge Tour. Two of Europe’s other leading amateurs Mario Galliano (ESP) and Ivan Cantero Gutierrez (ESP) are also playing in Spain next weekend.

The weather forecast (@ Thursday 28th April, 9.00 pm) has generally deteriorated as the week has progressed with Friday and Sunday now looking particularly cold and wet.

Like The Open players will tee off between 7.30am and 3.30pm on Friday and Saturday so the weather may very well play a big part in scoring.

Ireland’s Jack Hume is the favourite with the bookmakers.

Click on the links below to view the current betting odds (which will be removed when play starts): –

Sweden’s Marcus Kinhult won the 2015 Lytham Trophy by 8-shots. In testing conditions he shot rounds of 68, 69, 71 and 72 to finish on Even par and comfortably hold off Richard James (WAL), Robin Roussel (FRA) and Cormac Sharvin (IRE), who all tied for second place on +8.

History, Past Winners and Records

The competition was first played in 1965 after the Club identified a need for another top class amateur competition and one that was in the North of England.

A date on the first weekend in May was established and a 72 hole stroke play format adopted.

Member’s subscribed to purchase a unique sputnik trophy. This does not leave the Club with a smaller replica issued annually to that year’s winner.

As one would expect the list of past winner’s is a who’s who of GB&I and more recently world amateur golf.

In 1999 the Lytham Trophy was won by Tino Schuster, the first time a non-GB&I player had been successful.

The Royal Lytham website lists all of the Past Winners and their Scores.