Gregory shot 72 at Royal Porthcawl and 71 at Pyle & Kenfig in the Stroke Play Qualifying. This saw him finish tied 13th with a +1 total.

The Stroke Play Qualfying stage of The Amateur Championship was completed this evening.

The top 64 and ties cut fell at +5 with 79 players progressing to the Match Play stage which is being played exclusively at Royal Porthcawl GC.

It is the most prestigious amateur golf event played outside of the United States and without question the highlight of the Great British and Irish (GB&I) amateur season.

Format
Entry is limited to 288 players with the event administered by the Championship Committee of The R&A.

Two qualifying rounds of stroke play, one round on each course, will be played on Monday 13th and Tuesday 14th June. Tee times will start at 7.00 am and end at 3.52 pm on both days.

The 64 players with the lowest stroke play scores, and ties for 64th place, will be seeded in line with their finishes and will advance to the match play stage. All other players will be eliminated at this point. This second stage will be played solely at Royal Porthcawl between Wednesday 15th and Saturday 18th June. Matches will be played over 18 holes except for the Final which will be over 36 holes.

Players
Players from 32 countries will contest the 2016 Amateur.

Whilst there are some American’s playing, including 2015 Walker cup mid-amateur Mike McCoy, it remains the case that the vast majority sadly continue to skip the Championship. Without their participation it will always lack a little something despite the ‘prizes’ on offer. This year, with the Palmer Cup taking place at Formby GC in a few weeks time, I had hoped that one or two might make the extra effort to come over early.

Unfortunately Wales’ No. 1 amateur David Boote (SPWAR 29) has his Stanford graduation ceremony on Monday so is unable to play. Fellow Palmer Cup player Sam Horsfield (ENG / SPWAR 6) was always unlikely to enter but at least he now has the excuse of qualifying for the US Open at Oakmont which also takes place next week.

This latter point begs the question, even allowing for the exceptional challenges of this Olympics year, why do the R&A schedule the Amateur Championship against a professional men’s Major ? It’s hardly likely to help with media coverage and interest as the event reaches it’s climax next week is it ?

Courses
The Championship is being staged at Royal Porthcawl and Pyle & Kenfig, two of the best courses in Wales. 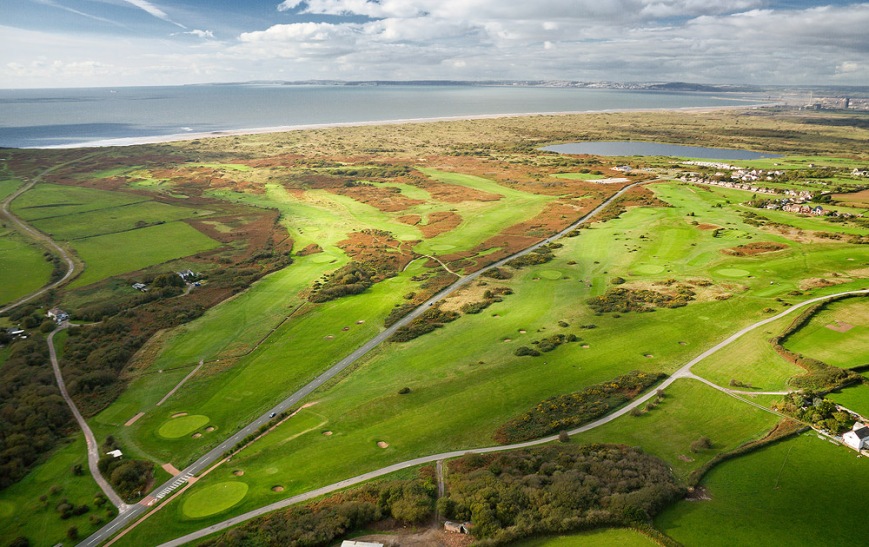 This will be the seventh time Royal Porthcawl has been the lead course at The Amateur Championship. It has also hosted the Curtis Cup (1964) and Walker Cup (1995 – GB&I beating a US Team including Tiger Woods 14-10).

Porthcawl plays to 7,065 yards and a par of 72 from it’s black championship tees. Pitched down to the shore it famously allows golfers to see the sea from every hole on the course but also feel the wind on most of their shots too.

Neighbouring Pyle & Kenfig has co-hosted The Amateur with Royal Porthcawl on two previous occasions, 1988 and 2002.

P&K has a total yardage of 6,860 from it’s blue championship tees. It is a par 71 course of two different halves; an inland parkland start gives way to a final 9 played across a road amongst sand dunes nearer to the coast.

The Amateur Championship has been played at Royal Porthcawl on six previous occasions. The winners then were: –

1951 – Dick Chapman (USA)
In the first Amateur to be held in Wales and with comedian Bob Hope in the field Chapman beat fellow American Charles Coe 5&4. Chapman had lost in two Finals in the previous four years so was certainly deserving of his eventual win.

1965 – Sir Michael Bonallack (ENG)
Sir Michael made a terrible start to the Final against Clive Clark, finding himself 7 down after 8 holes. At lunch he won the jackpot on the club’s fruit machine before completing his comeback to win 2 and 1.

1980 – Duncan Evans (WAL)
Playing in heavy rain on a flooded course Evans (21), who had beaten a 16 year-old Ronan Rafferty in the semis, became the first Welshman to win the Amateur in front of a home crowd. His 73 in round 1 of the final was particularly memorable given the conditions. He beat South Africa’s David Suddards 4&3 on a day that gradually improved weather wise.

Just like at The Open players will tee off between 7.00am and 3.52pm on Monday and Tuesday so the weather may very well play a part in the stroke play qualifying scoring.

As they are removed from their website when play starts I have taken photos of the original odds so we can look back at them once the results are known. 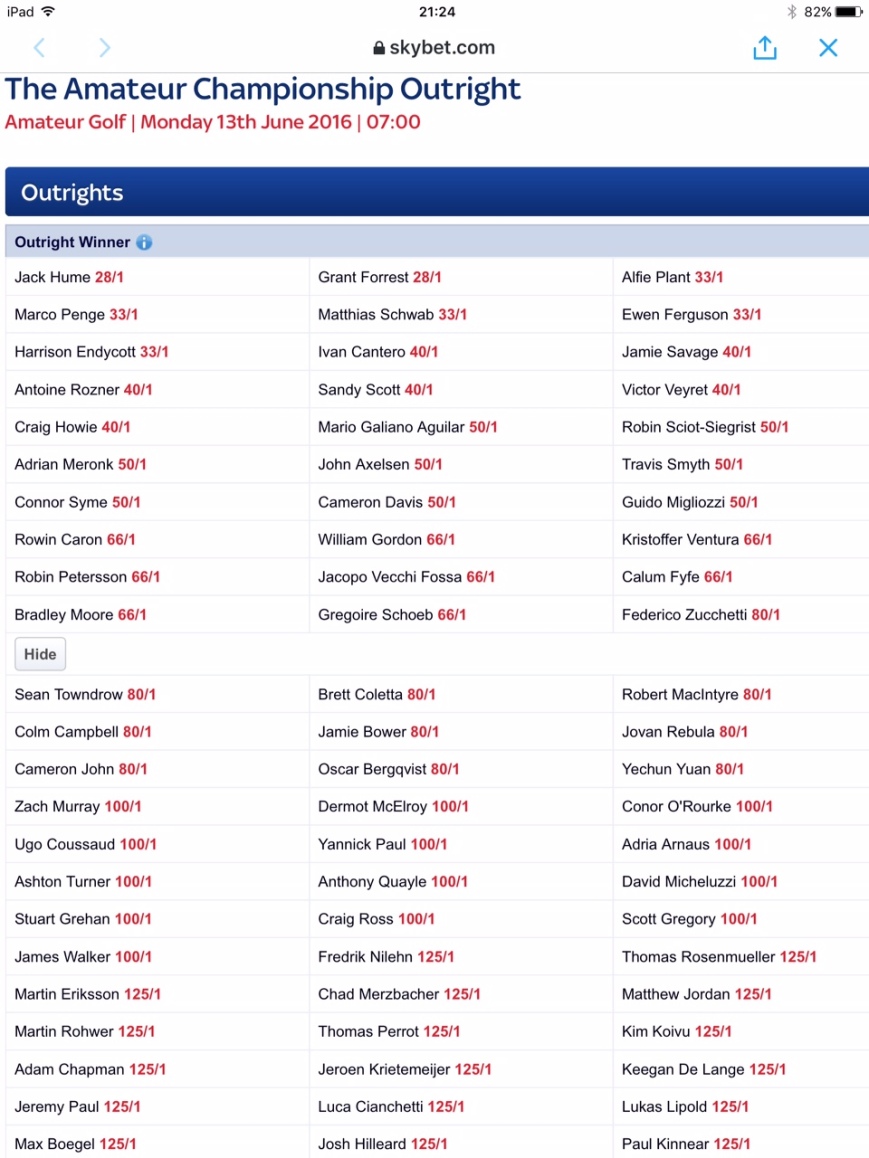 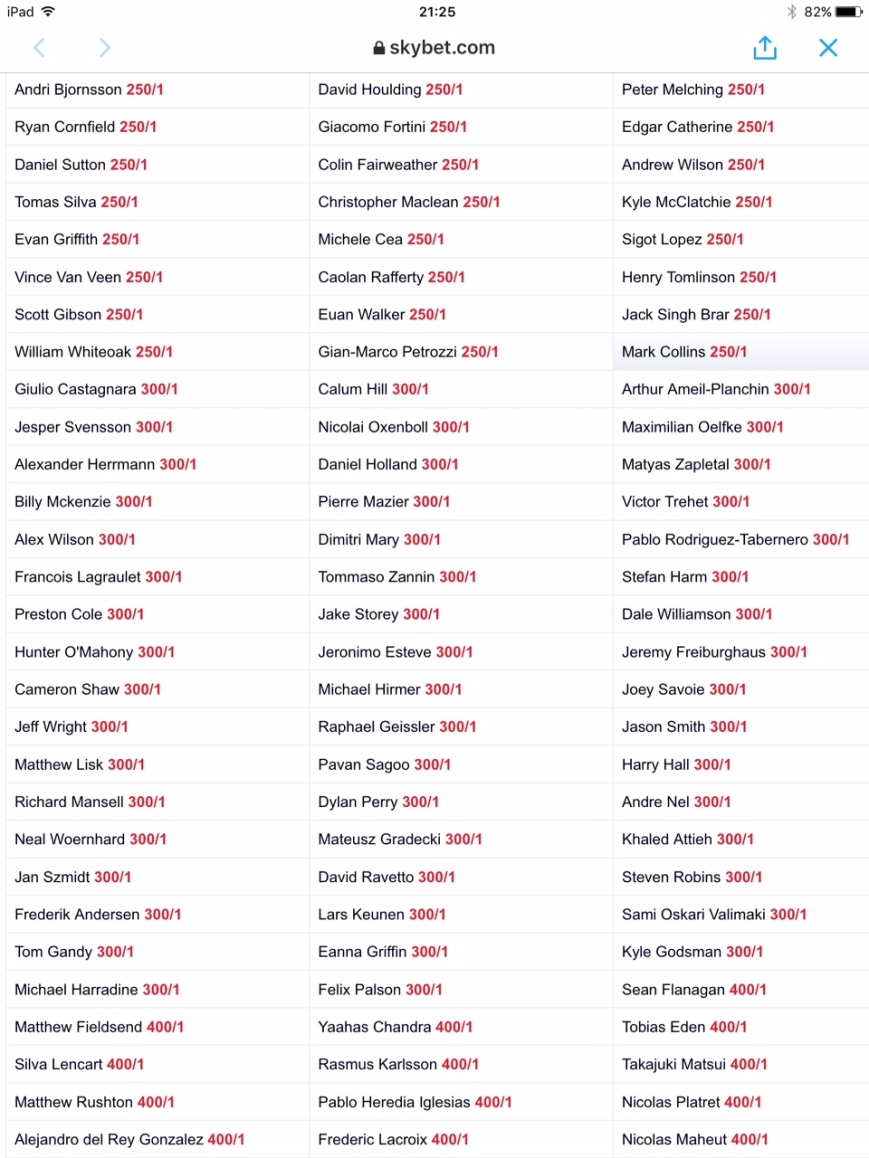 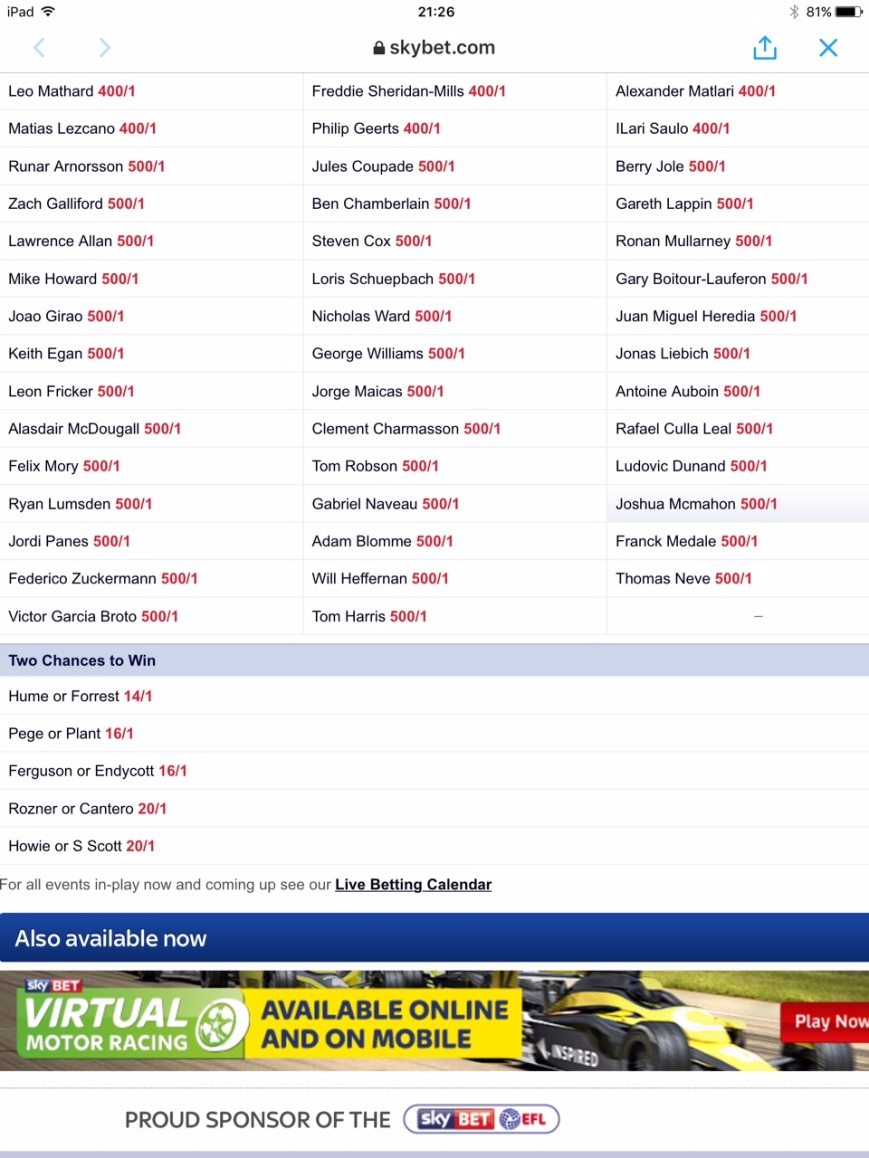 Ireland’s Jack Hume was the 28-1 initial favourite with SkyBET when they released their original odds.

Prizes
The winner of The Amateur Championship will be exempt into next month’s 145th Open Championship at Royal Troon.

They will also be exempt into the 2017 US Open Championship, which is for the first time being played at the stunning Erin Hills in Wisconsin.

Traditionally, the Amateur Champion is also invited to compete in the following year’s Masters Tournament at Augusta National.

A Short History of The Amateur
The Amateur Championship was first played in April 1885 at Royal Liverpool GC. Allan Macfie (SCO) was the first champion beating Horace Hutchinson (ENG) 7&6 in the Final.

Up until the Second World War it was a hugely prestigious event and in a many of these early years was afforded a much higher standing in the game than The Open. Players like Johnny Ball (ENG), Harold Hilton (ENG) and Freddie Tait (SCO) were all amateurs and better than most of the professionals of the time.

With only modest rewards available in the professional game many of the better players simply stayed amateur. The great American Bobby Jones, who won The Amateur in 1930 on the way to his Grand Slam, remains the most well known career amateur.

Even after the war players remained amateur for much longer and famous names like Frank Stranhan (USA), Joe Carr (IRE), Sir Michael Bonallack (ENG) and Peter McEvoy (ENG) all built their reputations on Amateur Championship wins.

With the growth and transformation of the professional game from the early 1980s onwards both the better players and the media increasingly started to turn their backs on the amateur game. Save for exceptional cases like Gary Wolstenholme (ENG) all continuity has been lost over the last 30 years and most of the young golfing stars of today rarely play any more than 2 or 3 Amateurs before being lured into the pro ranks by the huge rewards on offer. With the sports media facing their own challenges most of their resources sadly have to be directed towards the superstar players and the Major Championships leaving the amateur game scrambling for any coverage it can get.

Past Winners
The greatest player in the history of The Amateur is Johnny Ball. The Hoylake man won the Championship a record 8 times between 1888 and 1912.

Only three other players have won the competition more than twice; Sir Michael Bonallack (5), Harold Hilton (4)and Joe Carr (3). Bonallack amazingly won it three years in a row between 1968-1970. The last person to retain The Amateur was Peter McEvoy in 1977 and ’78.

The last 10 winners of The Amateur Championship have been: –

A great honour for all of the players listed above but perhaps when one reviews where most of them are now another clear reminder that golf is an incredibly tough game and career to pursue at the professional level.