Barrow took control of the Championship with a 64 on Sunday morning; a round which included one eagle and seven birdies.

Barrow, a member of Royal Lytham & St Annes G.C., said in an interview with Scottish Golf “It’s been a good few years so to finally get a big win is amazing. The last three days have been incredible. My game’s been pretty solid. The putter has probably been the hottest thing in the bag which was needed round here.”

Wilson’s 62 (-7) in Round 1 which included eight birdies proved to be the low round of the Championship.

44 players made the 36 hole cut on Saturday evening which fell at 140 (+2). In form Arron EDWARDS-HILL (ENG) was the most notable player to miss out.

There were two holes in one recorded. Patrick KEELING (IRL) on the 15th in Round 1 and Joe HARVEY (ENG) on the 17th in Round 3 took the happy memories away from Dumfrieshire. 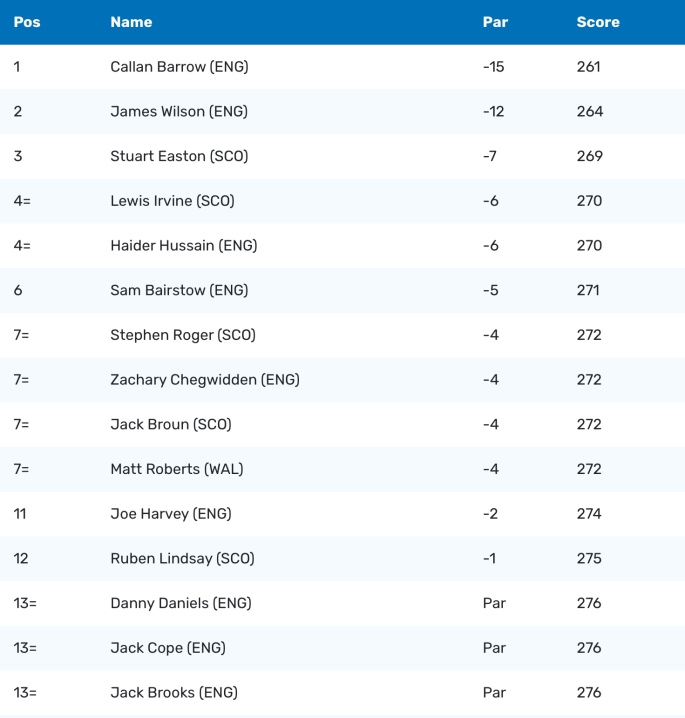 This is the first major British or Irish amateur championship in 2021.

Due to COVID-19 protocols no caddies or spectators will be allowed on site.

This open amateur competition consists of 72 holes of stroke play.

18 holes will be played on both Friday 28th and Saturday 29th May.

A 36 hole cut will then take place with only the leading 40 competitors and ties qualifying for the final two rounds which will be played on Sunday 30th May.

In the event of a tie for the Championship there will be a sudden death play off. All other ties will be resolved via card count back.

144 competitors will start the 2021 Championship.

The Championship is returning to its traditional late May / early June time slot following a misguided move in 2018 and 2019 to late August which led to a noticeable drop off in field quality.

However, the impact of ongoing COVID-19 travel restrictions and the early Walker Cup means that Scottish Golf are not going to see a material uplift in the standard of the field this year. The former means few foreign players have entered. The latter has pushed back the US College schedule and changed the priorities of many leading GB&I players. The NCAA National Championships are now being played in Arizona directly opposite this event. The fact the Walker Cup has already been played also means that many GB&I players have already turned pro or are planning to do so shortly so have no motivation to play.

Additionally, the Irish Challenge event on the European Challenge Tour is being played at Portmarnock Links between 27-30 May which has drawn a number of the leading Irish amateurs.

Jack Brooks, the world’s most active amateur golfer, is preparing for the Championship as only he knows how – by playing in the 72-hole Lagonda Trophy at Gog Magog GC in Cambridgeshire on Wednesday and Thursday. He will finish up around 6.30pm before travelling the 312 miles up to Dumfrieshire. He tees off at 1.10pm on Friday afternoon.

Southerness is a flat links course set on the Solway Coast near Dumfries in the south west corner of Scotland.

It was designed by Philip Mackenzie Ross and laid out by Messrs. Sutton and Sons of Reading in 1946. The Club is therefore celebrating its 75th anniversary this year.

The championship tees enable the par 69 course to be stretched to a demanding 6,728 yards.

A number of prestigious amateur Championships have been staged on the course over the years. It has previously hosted the Scottish Amateur Open Stroke Play in 2002 and 2013 with Barry Hume and Garrick Porteous coming out on top in those years.

The Club have posted a nice aerial video on their website ahead of the Championship which gives a good feel for the examination that awaits the players this week.

The Winner receives the distinctive Championship Trophy and a silver gilt medal.

Silver and bronze medals are also awarded to the runner-up and third place finisher(s).

The weather forecast is reasonably good. Whilst there is likely to be little sun the players will be pleased to see the winds are forecast to be weak throughout the weekend.

The 2020 Scottish Men’s Open Championship was cancelled due to the COVID-19 pandemic.

The Scottish Men’s Open Amateur was first contested in 1967 and has an impressive list of past winners. Here are some of them: –