Jack COPE won the 2021 St Andrews Links Trophy after coming through a sudden death play-off on the Old Course’s 1st and 18th holes against Robin WILLIAMS and George BURNS.

Speaking to the tournament organisers Jack said “I was committed to every shot I hit out there over those four holes. I probably played the best I played all week tee to green. I guess that was a nice time to really peak. I love the home of golf. I particularly like the Old Course, mainly because I normally score alright round there which helps. Just walking over that bridge, taking photos, thinking about all the players who have won here and played here. This is very special to me.” 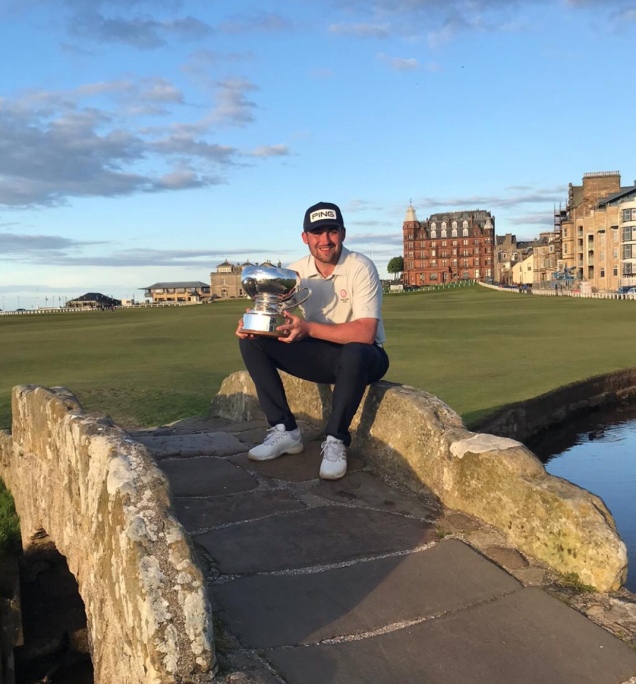 Cope and Williams parred the 1st to eliminate the Scotsman Burns.

The English pair then halved the 18th in birdie and the 1st in par before Cope prevailed with a birdie on the 18th, the fourth extra hole they played. Cope’s drive to 25 feet on the home hole this time proving to be decisive.

Reigning English Amateur champion Jack COPE shot a bogey free final round of 67 to take the early clubhouse lead on Sunday evening. Cope had entered the final day tied 13th on -2 and five shots behind the overnight leader Charlie THORNTON.

As the later players came in Robin WILLIAMS and George BURNS both birdied their 18th hole for 70’s to join Cope on 280 (-8).

John GOUGH recorded a 66 in the final round, the best score of the three rounds played on the Old Course this weekend.

Here are the final results which include the play-off: –

Wormleighton produced the best Round 3 score, matching Callan Barrow’s 67 on the Old yesterday.

Scottish pair Liam WALDRON (-4) and Ruben LINDSAY (-2) moved up the leaderboard with morning rounds of 69 and 68 respectively.

Richard KNIGHTLY matched the leader’s score to also stay in second place. He is now joined on 136 (-6) by Dubai-based Englishman Josh HILL who went out in 32 to post a 68.

There were six other 68’s in Round 2 of the St Andrews Links Trophy but the best rounds of the day were 67’s (-5) from Darren HOWIE and Callan Barrow. Howie’s highlight being a front nine 30 which included a hole-in-one on the 8th.

With 36 holes to play on Sunday there is clearly an opportunity for a player well down the leaderboard currently to come from well back to take the title.

Here is a summary of the leading players and those that made the cut: – 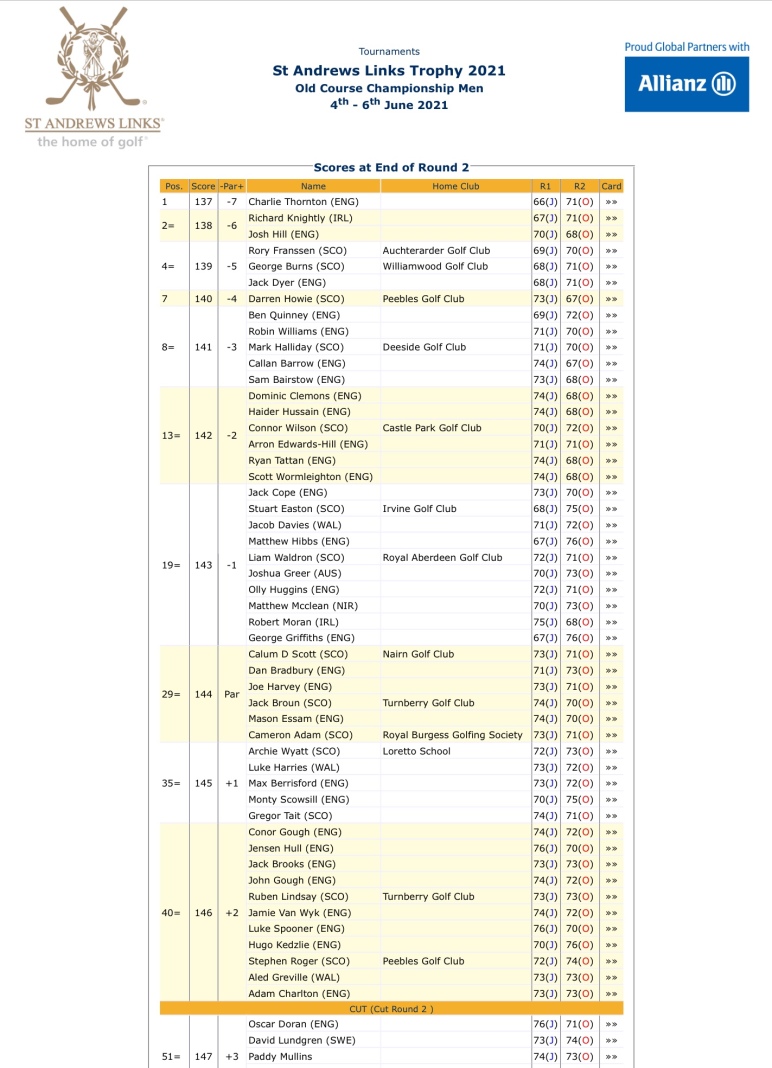 Teeing off at 7.40am Yorkshire’s Charlie THORNTON produced seven birdies in his 66 (-6) on the Jubilee Course to secure the opening round lead at the 2021 St. Andrews Links Trophy.

George GRIFFITHS, Richard KNIGHTLY and Matthew HIBBS all fired 67’s to finish the day tied for 2nd place, one shot back of our leader.

Griffiths enjoyed a particularly memorable round with a hole-in-one on the 17th.

Pre-Championship favourites Jack DYER (-4), Dan BRADBURY (-1), Arron EDWARD-HILL (-1) and Olly HUGGINS (Ev) are all well placed to mount an attack over the weekend.

Here is the top 25 leaderboard after Round 1: –

144 golfers will tee off on Friday 4th June in the 32nd St. Andrews Links Trophy.

This event has become one of the ‘majors’ in men’s amateur golf helped by its venue and timing.

I will add the live score link to this article once it becomes available and provide daily reports on play over the weekend.

The Links Trophy is a 72 hole scratch stroke play competition played over the St. Andrews Links in early June.

The field is primarily determined by reference to the World Amateur Golf Ranking (WAGR) as at 29th April 2021 and finished off with various National Golf Union and St. Andrews Links Trust nominations.

This year Round 1 will be played on the Jubilee Course – sometimes the New Course is used – with Round 2 on the Old Course.

Following a top 40 and ties cut on Saturday the leading players will play a final 36 holes on the Old Course on Sunday.

The winner will be the player who returns the lowest 72 hole aggregate score.

In the event of a tie a sudden death play-off will be held over holes 1 and 18 on the Old Course.

Ties for other places will be decided by the lowest score for the last 18 holes or the last 9 or 6 or 3 or 2 or 1 hole if necessary.

Due to the early playing of the Walker Cup and COVID-19 travel restrictions the field is much weaker than has previously been seen.

Whereas we normally see over 20 countries represented only a handful of overseas players have been able to make the journey in 2021.

The impact of the R&A’s decision to agree to play the Walker Cup in early May is going to be seen very clearly in men’s amateur events this summer.

There are just 15 of the leading 30 GB&I players in today’s Scratch Players World Amateur Ranking (SPWAR) competing. This excludes the seven international class amateurs who have turned pro since the Walker Cup team was announced on 30th March. Extending the same analysis to the top of the current tree there are only 10 of the top 20 and just 3 of the top 10 playing in St. Andrews this week.

Perhaps the most interesting entry is Paul HOWARD (ENG). Paul turned pro in March 2015 shortly after a successful tour of Australia where he won the New South Wales Amateur. He went on to win on the PGA EuroPro Tour in June 2015 and then the European Challenge Tour in August 2017. He has clearly now regained his amateur status and I assume must have received one of the nominations from either England Golf or the St. Andrews Links Trust as he currently has no ranking. Best wishes to Paul on his return to elite amateur competition.

Whilst it doesn’t overly affect the field quality it should be noted that most of the Irish players are staying at home to play in the Ulster Men’s Stroke Play Championship which starts on Monday 7th June at Royal County Down GC and that the Arnold Palmer Cup match starts on 11th June at Rich Harvest Farms in Illinois.

Tee times in Rounds 1 and 2 will start at 7.00am and end at 3.10pm so as with any links course the draw could play a part in proceedings.

The winner receives The St Andrews Links Trophy, a commemorative medal and vouchers to the value of £500.

Reducing voucher prizes are awarded to the top 10 finishers in all.

In addition to the main prizes The Ian Forbes Memorial Cup is awarded for the best aggregate score on the first two days of the Championship.

The 2020 event was cancelled due to the COVID-19 pandemic.

Burnage recorded a 268 (-20) total and completed a memorable comeback, having started the final day 6 shots back of the 36-hole leader Matty LAMB (ENG), who ultimately had to settle for 2nd place on -19. Caolan RAFFERTY (IRL) finished 3rd on -17.

It was a surprise to many that the Devonian links specialist was subsequently overlooked for the GB&I Walker Cup team that played USA at Royal Liverpool G.C. just two months later. 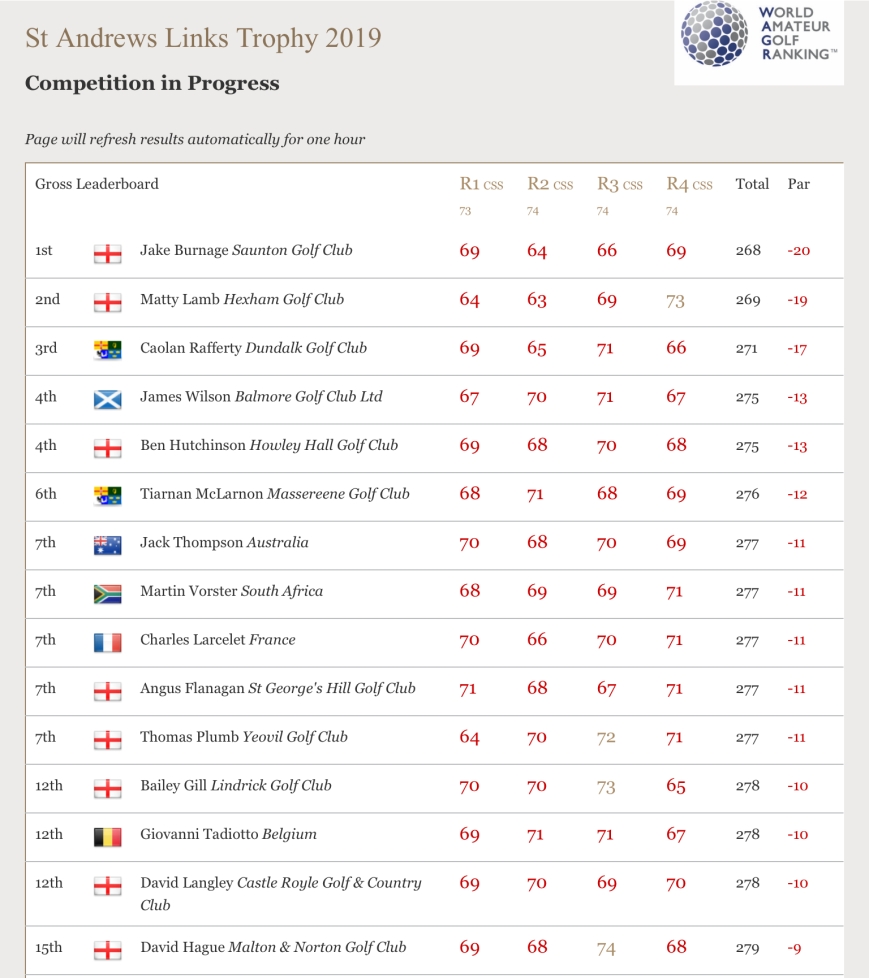 The most famous winner is Justin ROSE who won in 1997.

Interestingly given the normally cosmopolitan nature of the fields the Links Trophy has only been won by players from outside GB&I on three occasions – Australia’s Stuart BOVIER (1990), Daan HUIZING from The Netherlands (2012) and Federico ZUCCHETTI from Italy (2015).

One thought on “The St. Andrews Links Trophy – 2021 Preview & Results”