Kyle shot 71 (-2) today with five birdies, including one on the last, offsetting three bogeys. His -10 score was good enough for a narrow 1-shot win. 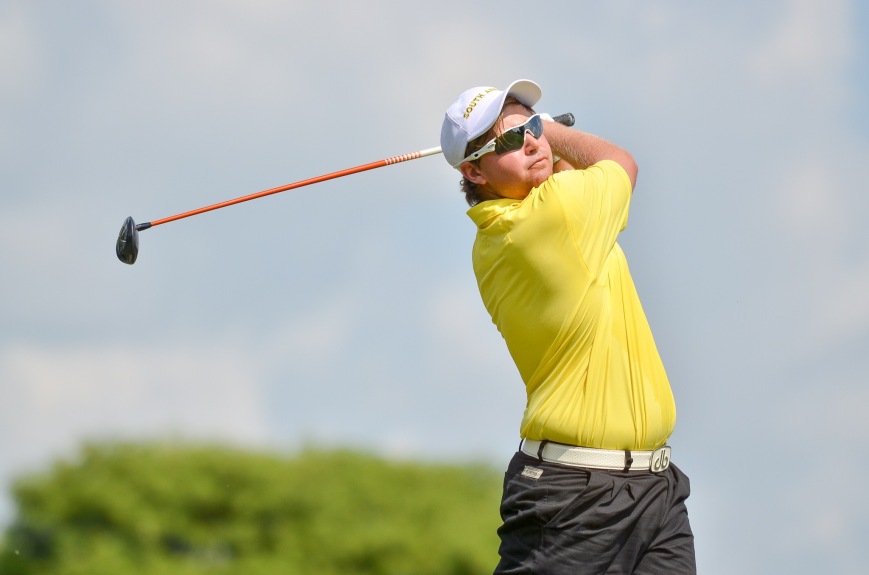 If that wasn’t enough the victory also took McClatchie to the top of the Scratch Players World Amateur Rankings (SPWAR). He is the first South African to hold the No. 1 spot in this ranking. However, with the NCAA Division I National Championships currently being played this status is likely to be short lived (at least for the time being).

Jamie Stewart had a superb weekend shooting the lowest two scores on both days. He followed yesterday’s 67 (-6) with a 68 (-5) today. Having dropped two shots in his first three holes he reeled off 7 unblemished birdies over his remaining 15 holes. He will surely take huge confidence from a 5 birdie 32 on his finishing 9 holes.

Jake Burnage continued his rich vein of form too. Having finished 3rd at the Lytham Trophy he put together a very consistent 71, 70, 70 and 72 at Woodhall Spa. I was particularly impressed with his three birdies in a row finish in the heat of battle. He has moved up to 98th in the SPWAR and must now firmly be in the GB&I Walker Cup mix.

Jack Singh Brar also shot 72 for another excellent finish in 2017. He continues to look in complete control of both himself and his golf game.

Matthew JORDAN (ENG) shot a final round 70 (-3) to finish 5th. He has now finished in the Top 10 at the Lytham Trophy, Irish Amateur Open and the Brabazon in the last month which clearly tells you he is starting to fulfil his potential and that he now sits firmly amongst our finest amateurs.

It was also good to see Dan BROWN (ENG) finish in 6th place after rounds of 72, 68, 75 and 72. Hopefully he can use this as momentum to put together a string of good results in the coming weeks.

David BOOTE (WAL) finished 7th and Connor SYME (SCO) tied 8th. Both started poorly today but showed their experience in grinding out good scores at the end of the day. Boote was 4-over after 5 holes before securing 4 birdies on the way back home to record a very creditable par 73. Syme (71) was 2-over after 3 holes before he turned his day around with 3 birdies and an eagle on the par 5 14th.

Both Boote and Syme will travel south tonight to Walton Heath GC to join the other three amateurs competing in tomorrow’s 36 hole US Open Sectional Qualifying event. Good luck to them all.

Having played in Wednesday’s Pro-Am at the BMW PGA Championship at Wentworth Harry GODDARD‘s disrupted preparation and long journey up to Lincolnshire haven’t affected his performance. Rounds of 72, 70 and 74 (-3) have left him in striking distance with 18 holes to play.

David HAGUE (73 73 71 -2), who won the Laguna Trophy so impressively last week, continues to creep up the leaderboard too. He’ll start the final day in tied 12th place.

After his disappointing 78 in the opening round Connor SYME recorded his second successive 70 to move up to -1 and tied 16th place.

South Africa’s Kyle MCCLATCHIE matched the best round of the week (66) to move into the 36-hole lead on -10 on a pleasant but windy day at Woodhall Spa.

A little further down the leaderboard just three other players broke 70 on Day 2. Rowan LESTER (67), David BOOTE (69) and Alisdair MCDOUGALL (69).

The 36 hole cut saw 63 players on +4 and lower qualify for the final 36 holes on Saturday and Sunday.

Ben CHAMBERLAIN (76 75 / +5) just missed the cut but left Lincolnshire with the consolation of having scored the Championship’s fifth hole-in-one on the 5th hole.

Playing in near perfect conditions a course record 66 (-7) gave Braintree’s Todd CLEMENTS the Round 1 lead at the Brabazon Trophy. His only bogey came on the par 4 2nd hole before he reeled off eight birdies including six on the back nine to finish with an inward score of just 31.

Clements’ 31 was matched by Jack SINGH BRAR the recent winner of the Lytham Trophy. Jack had just the one bogey in his round of 67 (-6) on the tough Woodhall Spa heathland course.

Frenchman Alexandre FUCHS (-6) is tied second having hit something of a purple patch on Woodhall’s fourth and fifth holes. His 2-1 scores, two eagles and four under the card, clearly went along way to making him the the early clubhouse leader in Round 1.

Robin DAWSON, Robert MACINTYRE and Jacob OAKLEY followed Fuchs in on the short 5th, playing 163 yards to a back pin. Amazingly four holes-in-one were recorded on this hole during round 1. Dawson and MacIntyre went on to deliver 68’s (-5) and therefore were tied 4th after Day 1.

The English Men’s Open Amateur Stroke Play Championship for the Brabazon Trophy will be played at Woodhall Spa Golf Club this coming week.

The 71st playing of this event takes place between Thursday 25th and Sunday 28th May on the Lincolnshire Club’s Hotchkin Course.

The competition consists of 72 holes of stroke play golf with 18 holes being played each day.

A 36 hole cut will take place with only the leading 60 competitors and ties progressing to the two weekend rounds.

In the event of a tie for the Championship on Sunday, there will be a sudden death play off.

150 competitors will start the 2017 Championship.

The 2017 start sheet for Rounds 1 and 2 can be viewed here – Brabazon Trophy Start Sheet.

88 players were exempted into the field based on their previous accomplishments with 62 coming through a qualifying process.

Two Qualifying Competitions were held last week; the North at Sandiway G.C. in Cheshire and the South at Littlestone G.C. in Kent, with 31 players progressing from each one.

Sam BROADHURST (-5) of Atherstone G.C. was the medalist at Sandiway. Click here to view the full North Qualifier Results

Sandy SCOTT (SCO) had entered but withdrew before play commenced.

Barry HUME (SCO), Stuart GREHAN (IRE), Scott GREGORY (ENG) and Paul MCBRIDE (IRE) are the four that are missing. Gregory is playing in The Memorial Tournament and US Open Championship in early June so has travelled over to USA this week.

Liam JOHNSTON (SCO) and Jack SINGH BRAR (ENG), who by rights should also be in the Squad based on their 2017 performances, are also competing at Woodhall Spa.

In 2016 the Scratch Players World Amateur Ranking (SPWAR) listed the Brabazon Trophy as it’s 24th most important amateur competition in the world based on the strength of it’s field.

The Winner receives the magnificent gold Brabazon Trophy shown in the centre of the photo below.

The Brabazon Trophy and Other Prizes (Photo: London Golf Club)

Prize vouchers will be awarded to those players finishing in the top six.

Two other prizes are connected to the Brabazon Trophy competition. The George Henriques Salver is awarded to the leading GB&I player in the Championship under the age of 20. The Philip Scruton Jug is awarded later in the year to the player returning the best aggregate scores in The Brabazon Trophy and The Berkshire Trophy (which will be played on 24th and 25th June).

From the blue Championship tees it plays to 7,080 yards with a par of 73. Here is the scorecard: – 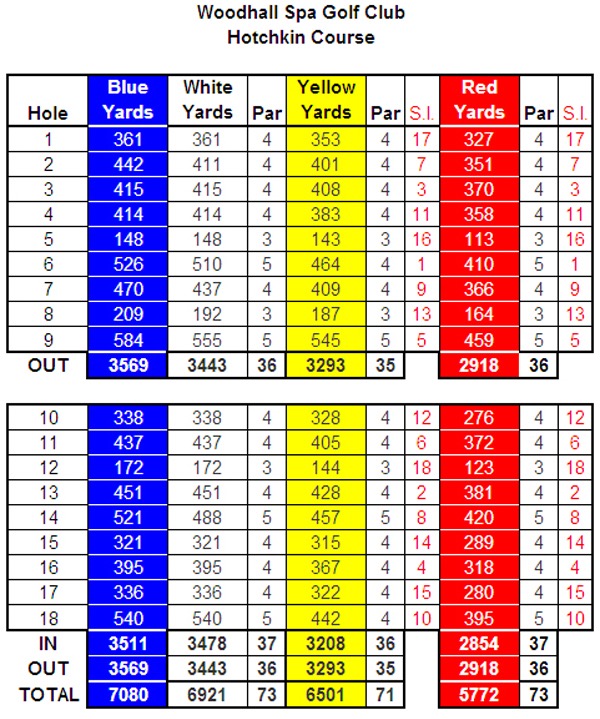 * The 12th has been extended to 176 yards since the above card photo was taken so the course now plays to 7,084 yards in total.

The Hotchkin family sold the facilities to the English Golf Union in 1995. Over time an impressive National Golf Centre has been developed with a second course, The Bracken, also opened in 1998.

The Hotchkin Course is currently in the middle of a three year refurbishment programme by Renaissance Golf, with the work being overseen by their acclaimed lead architect Tom Doak.

The weather forecast (as at Tuesday 23rd May) is currently positive for all four competition days.

It is worth remembering that Rounds 1 and 2 will see players tee off the 1st from 7.00am right through until 3.40pm.

Jamie BOWER won the Brabazon Trophy last year at the London Golf Club with a total score of -12. He pipped Cameron DAVIS (-11) on the final green after a rain delay with Ryan LUMSDEN (-10) and Gian-Marco PETROZZI (-9) finishing third and fourth respectively.

Click this link to view the 2016 Brabazon Trophy results – Results

History, Past Winners and Records

The English Amateur International Trophy competition was first played in 1947.

In 1957 the official title was changed to the English Men’s Open Amateur Stroke Play Championship.

The current trophy was donated by Lord Brabazon of Tara in 1948 and the event has come to be widely known as the Brabazon Trophy.

Here is a list of all of the past winners, their scores and the Championship venues: – 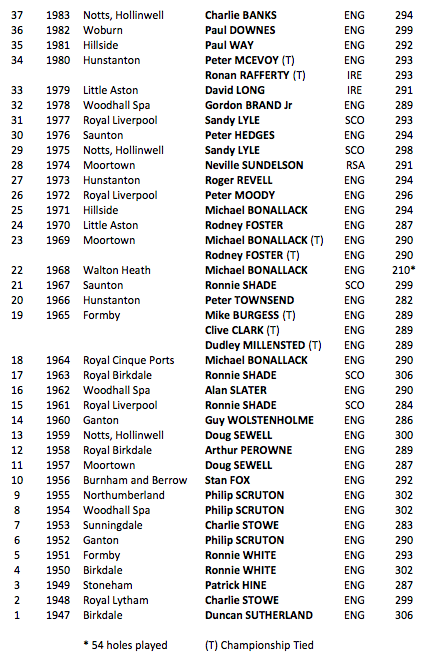 The first player to successfully defend the title was Ronnie WHITE who won at Birkdale in 1950 and nearby Formby in 1951.

Sir Michael BONALLACK has four wins to his name. The first came at Royal Cinque Ports in 1964 and the last at Hillside in 1971. At Moortown in 1969, with play-offs having been discarded at this time, he shared the title with Rodney FOSTER.

There have been several overseas winners over the years. South African’s Neville SUNDELSON (1974), Richard KAPLAN (1986) and Charl SCHWARTZEL (2002) have all won.  Other notable European winners include well known pros Ignacio GARRIDO (1992) and Peter HANSON (1998).