The six 2017 NCAA Men’s Division I Regional Championships have been concluded today across the United States.

450 players, made up of 81 five man Teams and 45 Individuals, competed over 54-holes of stroke play to determine who would progress to the National Championships.

The low five teams and the low individual not on those teams advanced from each Regional.

This year’s Finals are being staged at Rich Harvest Farms in Sugar Grove, Illinois between 26th-31st May.

There were four Great British and Irish (GB&I) players that negotiated this tough test. These were Harry ELLIS (Florida State), Elliot FULLALOVE (Jacksonville), Harry HALL (University of Nevada, Las Vegas) and David WICKS (Jacksonville). Ellis, Hall and Wicks are all on Europe’s 2017 Arnold Palmer Cup team for the match against USA in early June.

In something of a surprise two of our leading players, Sam HORSFIELD (Florida) and Paul MCBRIDE (Wake Forest), members of two of the seeded and stronger teams, failed to qualify.

Below you will find links to all of the Team and Individual scores with specific detail additionally provided on the GB&I players:-

There were no GB&I qualifiers from the Austin Regional.

Paul MCBRIDE and his Wake Forest Team (seeded 10th) had been strongly fancied to progress before play started.

In passing Nick VOKE‘s final round 61, which helped the Iowa State man to the Austin Individual title, on the 7,355 yard University of Texas GC is certainly worth acknowledging. 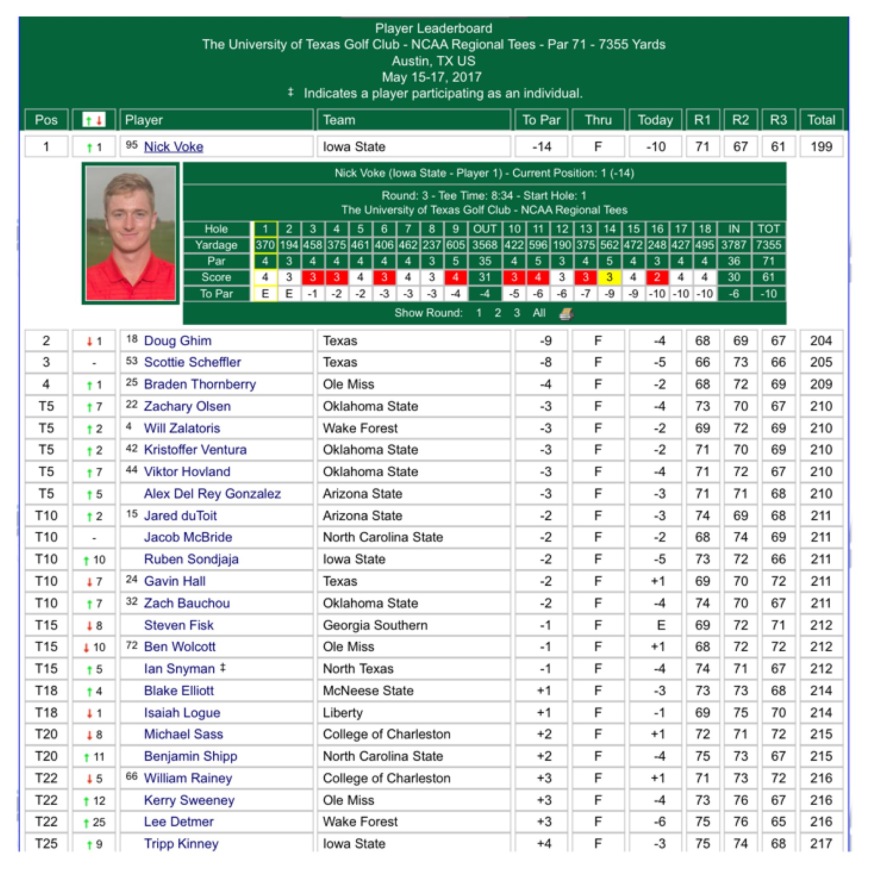 David WICKS and Elliott FULLALOVE progressed to the Nationals following a play-off between their Jacksonville Team and Northwestern who Ryan LUMSDEN represents.

Wicks had an eventful day. On the fourth hole, his 13th of the day, he accidentally dropped his ball into a lake by the green. After a five minute paddle he failed to recover his ball and was forced to record a double bogey six. It was to his credit he managed to par his way home thereafter.

The @JU_MGolf Video of David Wicks on the 4th Hole

Missouri finished 8th in the Team competition. As a result neither Euan WALKER or Rory FRANSSEN progressed despite reasonable individual performances.

There were no GB&I players competing at Stanford.

2016 US Amateur runner up Brad DALKE (Oklahoma) won the Individual event by 3-shots with an impressive -12 score.

Harry ELLIS continued his good season in the US with a strong Individual performance that led Florida State into the National finals.

Harry HALL enjoyed an excellent tournament finishing 6th with an Even par total after rounds of 73, 70 and 73. UNLV also won the Team competition ensuring that they will also progress to Illinois next week.

Pavan SAGOO also played well. His scores of 71, 70 and 78 left him in a very creditable tied 10th place in the Individual standings. Unfortunately his St. Mary’s (CA) Team finished tied 6th and he was not the best placed Individual from the non-qualifying teams so his College season has ended.

However, the main story from this Regional was the failure of 5th seeded Florida and Sam HORSFIELD to progress.

Good luck to our four players in next week’s Nationals.